My Mom the Hippie

My mother’s birthday is March 5th, the day after my birthday.  I used to think it was cool to have her birthday right after mine, but now that she’s been gone for almost 15 years I hate to celebrate mine and then the next day miss her so much that I ache.  There’s nothing that really can be done other than to remember her on that day and try to laugh.

Just recently I was telling my co-workers just how badass my Mom was.  She came to the US from Poland by herself when she was only 24.  She didn’t speak English except for “Bristol, Pennsylvania” and “ham sandwich.”  But she learned English and so much more.  It was she insisted that all five of her children go to college and she made that happen.  None of us had student loans when we graduated because of her planning and hers and my Dad’s hard work.

Another example of Mom’s badassery was when I was 10 and my brother Kaz was 14.  It was summer, Kaz was trimming the hedges behind our house when he got stung by a hornet.  It didn’t take him long to swell up like a balloon and Mom rushed him to the urgent care.  The doctors asked what had stung him, and my Mom just simply replied “A bee.”  I don’t think she knew the different kinds of wasps and hornets.  Anything that stung was simply a bee.  The doctor wanted to know what kind.

She raced home, and left my brother at the urgent care.  She wordlessly grabbed a gallon pickle jar and strode out the back door to the hedge.  She broke the branches around the nest and lowered the nest into the jar.  I don’t know if she’d been stung, but she closed the lid and brought the whole damn nest back to the doctor.  I can picture her now saying to him, “You want to know what kind?  Here.  This is what kind.”  I don’t think she even thought twice about it, or feared getting stung.  Kaz needed her, and that was it.  For the record, it was a white faced hornet.  She was way more badass than I.  When I get a wasp in my house I evacuate immediately.  There’s no way in hell I’d be able to do what she did that day.

My Mom’s command of the English language was sometimes comical, which when combined with her badassery made her a character I don’t think I could ever successfully write.  She often referred to someone that anyone else would call a hoodlum or thug as a “hippie.”  She didn’t get that hippies were the peace and love people from the ‘60s.  Any criminal was a “hippie” in my Mom’s mind.

When I was 14 we were leaving the house to go somewhere.  She asked me to bring the trash barrels in from the curb.  Being a surly 14 year old I said I’d do it when I got home.  She said “Do it now, or some hippie is going to come and steal them.”  I scowled, got out of the car, I definitely slammed the door and hauled the barrels back to the house.

Years later my Mom came home with a blue bin that had “Western Massachusetts recycles” on it.  We didn’t even live in Western Massachusetts; we lived in Connecticut.  I asked her where she’d gotten it from and she said “I found it on the side of the road when I was driving for work.”  It was the early 90s, and curbside recycling was just starting to catch on in many neighborhoods.  “Isn’t it great?” she asked.  She put it in the garage and used it to store things.  I think Dad still has it.

“Mom do you realize that you just became a hippie?” I asked her.

Peace, love and recycling bins, Mom.  I miss you. 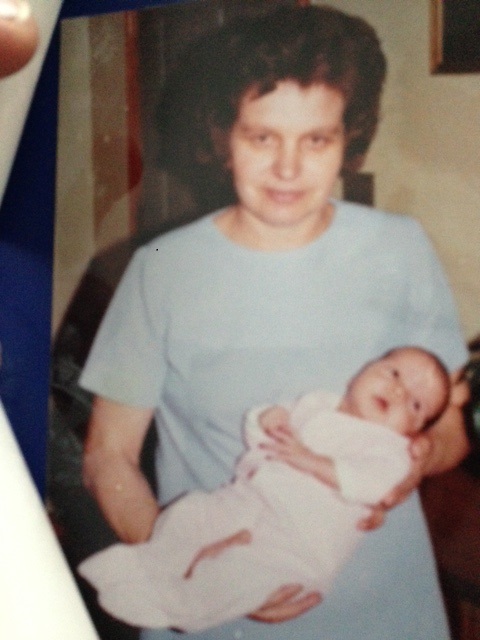