The Ghosts of Savannah

In January, Todd and I drove from Rhode Island to Florida.  I haven't ridden that way since I was 8 on a family vacation.  We were all in the station wagon fitted out with a CB radio.  My aunt, uncle and cousins were riding down with us in their conversion van also fitted out with a CB radio.  This was 1982, cellphones were a figment of imagination.  But the CB was way more fun as we got to overhear conversations between truckers.  Our call signs were Red Eagle and White Eagle.  My family was the White Eagle.  And the reason why we picked those names is because of the colors on the Polish flag, and the eagle on the center of it.  (Yes, my childhood was like My Big Fat Greek Wedding, but only with Poles.)  That time we drove straight through on the interstate.  I remember seeing the signs for some place called South of the Border.  The billboards lasted for miles, though we didn’t stop.  We drove straight through-no time for the tomfoolery of tourist traps.

This time with Todd was different.  We took 4 days to do a drive that would normally take approximately 20 some odd hours.  We left the interstate in New Jersey and drove the scenic route all the way.  We stopped in Virginia Beach and Myrtle Beach, but the highlight was the time we spent in Savannah, Georgia.

I’ve dragged Todd on ghost tours when we’ve visited cities that have a history of paranormal activity.  I don’t know if I believe in ghosts, as I’ve haven’t ever experienced anything involving unexplained things.  But ghosts tours are a fun way to check out a city and hear interesting folklore about the locations in town.  Todd’s joke is “You go on a whale watch, and you’re pissed you didn’t see a whale and consider it a waste of money.  But you go on a ghost tour and you don’t see a ghost?  Perfectly fine with it.”  And it’s true!

We had 1 night in Savannah, and we opted to do 2 ghost tours back to back as a way to quickly see the city.  The first one was a private horse drawn tour, here are some of the stories we heard.

The first one involved the Foley House.  Mrs. Foley was a widow who took in boarders to pay the bills.  One particular boarder was constantly throwing himself at her and she wasn’t interested.  On one night he came into her room and tried to have his way with her.  She grabbed a candlestick, clocked him over the head, and killed him.  Of course she didn’t know what to do with the body, and in those days she would have been accused of murder rather than it being self-defense.  There was another boarder, also who had a thing for her, that she asked for help in disposing of the body.  He was a mason, and said he’d help her if she would promise to marry him.  They did marry, they lived happily ever after.  But they lived with the body of the dead boarder behind a fake brick wall.  Years later when the house was being renovated, the false brick wall was taken down and a skeleton came tumbling out.

Another story involved Nathaniel Greene.  He was born in Rhode Island, only a few miles from where I live now.  He was George Washington’s right hand man in the Revolutionary War.  For his service he was given land in Savannah, but being a New Englander he hated living in the humidity of Georgia.  He also hated the Spanish moss that clung to the trees.  Every day he’d ride his property and cut it all down.  He’s now buried under a square in Savannah.  And would you know that there is not one bit of Spanish moss in any of the trees in his square.

And of course there are the stories of the unexplained things that happen in some of the buildings.  In the Moon Brewery the proprietors have been unable to get the upper floors renovated, as contractors keep getting creeped out and quitting when they see something happen they can’t explain.  The building next door to it burned to the ground.  It held slaves that were waiting to be traded to local plantations.  Women have reported seeing someone behind them wearing shackles as they stood at the mirror in the ladies room in the basement.

Afterward we headed to the Colonial Cemetery, where in 2008 a man got video of a boy dressed in Revolutionary War clothes running among the graves, and then shot up a tree.  We stood outside the gates, with our open containers—as it’s OK to walk around in Savannah with a drink—and laughed about whether we’ll see a ghost. 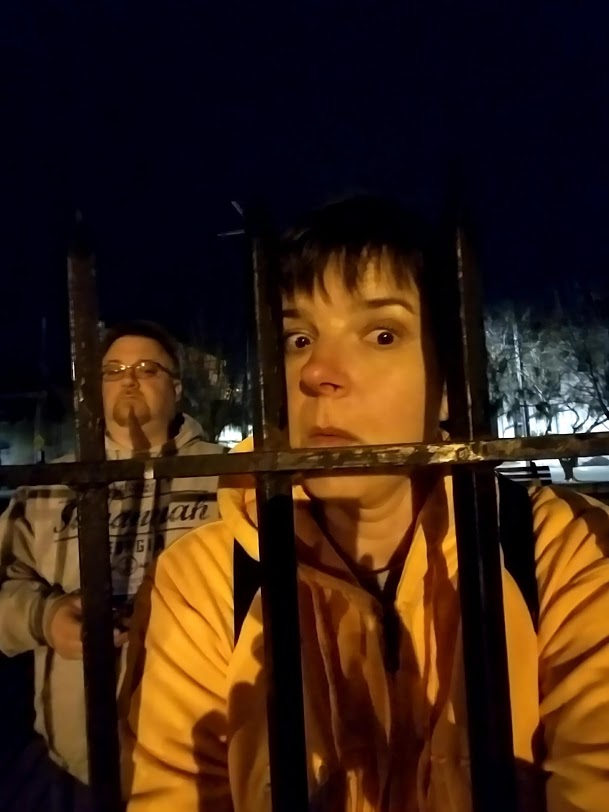 After 5 hours of ghost touring we didn’t see one.  Maybe we should stick to whale watches if we want to actually see what we’ve paid to see.