Getting Ready to Say Goodbye

“How’s Nemo?” my friend Mindy texted.  She knew he had a vet appointment last Monday but I hadn’t filled her in on all the details.  He’d been getting sluggish, he’d been waking up coughing and panting trying to catch a breath.  He looked downright miserable, and I told her the story over text.

Todd and I had been observing this.  “Maybe he’s been getting ready to tell us he’s ready,” he said.  He’s been saying that a lot, and I’ve been thinking it a lot.

We took him to the vet last Monday.  We are still social distancing at the vet, and consultations take place in the parking lot while we’re wearing masks.  We can’t even go into the examination room with him.  We had brought him in a month prior, and the doctor wondered if there was fluid around his heart and reported that she’d heard a rattle in his lungs.  On Monday she suggested we take him to a cardiologist at the local specialty vet.

We managed to get a coveted appointment with the cardiologist, and Todd brought him right in.  They took one look at the bluish tint on his gums and put him into an oxygen tank.  They reported that his oxygen saturation was very low, and managed to get him to perk up a bit on oxygen.  He stayed in the tank all day while the cardiologist examined him, all while Todd sat outside in the parking lot practicing social distance while Nemo was trying to catch his breath.

Todd waited, he chatted to me.  I told my coworkers at the start of every meeting at work.  “There might be a moment where I have to bail on this meeting.  Nemo’s not well…”

Todd came home without him.  The cardiologist called him later on in the day to report that Nemo’s heart was fine, but there is definitely something in his lungs but he couldn’t tell what it is.  We had decided that at Nemo’s advanced age of 16 and a half we wouldn’t be doing any exploratory surgery on him.  There’s no sense in torturing him with an operation.  Nemo has an increase in pulmonary pressure, which may explain why he’s having a hard time breathing.

Nemo came home at 9 PM, after being at the specialist all day, with a blue bottle of tiny white pills.  The prescription said to give him a half every 8 hours.  The label also said Viagra.  They prescribed Viagra to my elderly beagle.  Apparently it was designed to relieve pulmonary pressure, and the thing we all know the drug for is a happy side effect.

Nemo has been on Viagra for a week now.  And while he is still unsteady and untrusting on his feet, he seems to have a bit more spring in his step.  But there’s that nagging feeling that he might tell us it’s time.  For that reason we took him to one of his favorite places over the weekend.

Nemo has been a boat dog his entire life.  I have about a zillion pictures of the wind catching his ears.  I’ve watched him turn his nose into the breeze and watch it twitch and wondered what scent he was picking up.  About 4 years ago we discovered a small island called Bassett Island.  It’s just south of the Cape Cod Canal, and this island has a long sandbar attached at the end of it.  We were on vacation and we sailed to this spot and decided to go to the island to go swimming for the afternoon.  Potter loves to swim, and it was a hot day, so we went with him.  Nemo waded out onto this sandbar to be closer to us and to cool off.  He is not much of a swimmer, but he will wade in so long as his feet are touching.  The island also has a long beach for him to beach comb, and if he’s lucky find a dead fish to roll in.

Because we’re getting the feeling that he’s getting ready, we took him to Bassett Island last weekend.  The last time we were there it was a week day, and we had the place to ourselves.  This time it was Saturday and it was crowded.  We kept him on the leash, as a beagle off leash tends to investigate any available snacks in any available picnic basket.  But we got him out on his sandbar, and we strolled on the empty side of the island in search of a dead fish to roll in.  We never found a fish, but we did sniff every inch of the beach.

We waded in with him as long as he could touch the bottom. 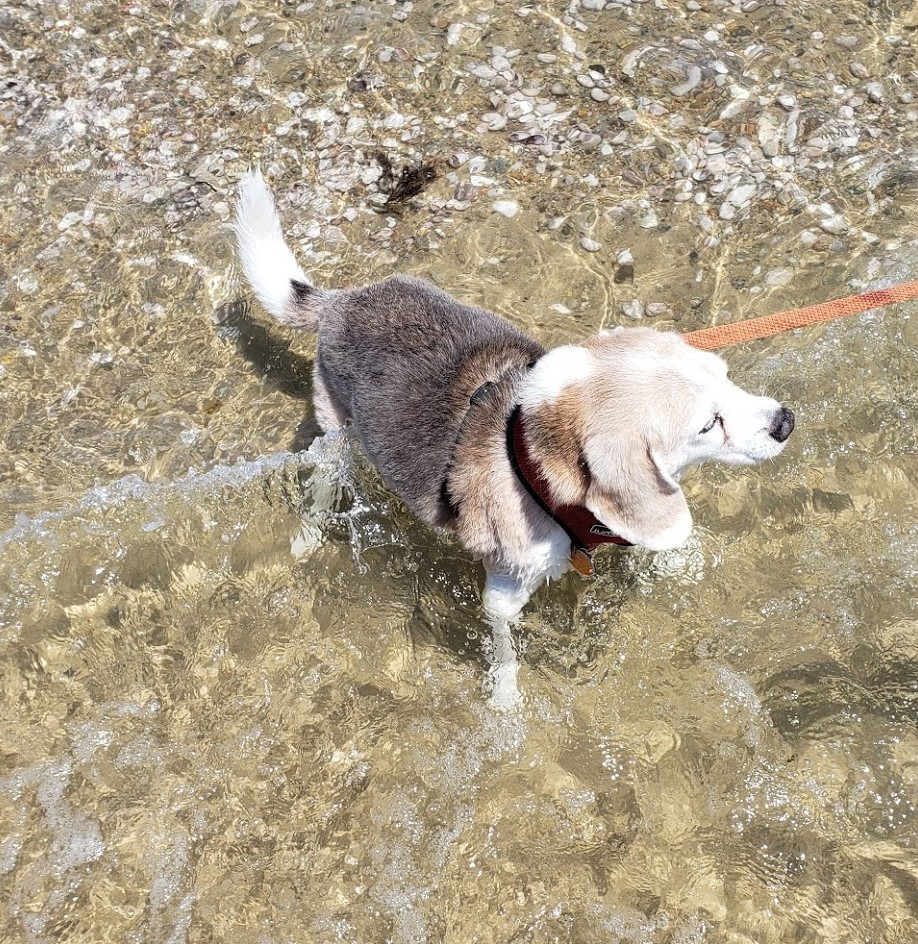 We wish we could have taken him off the leash. 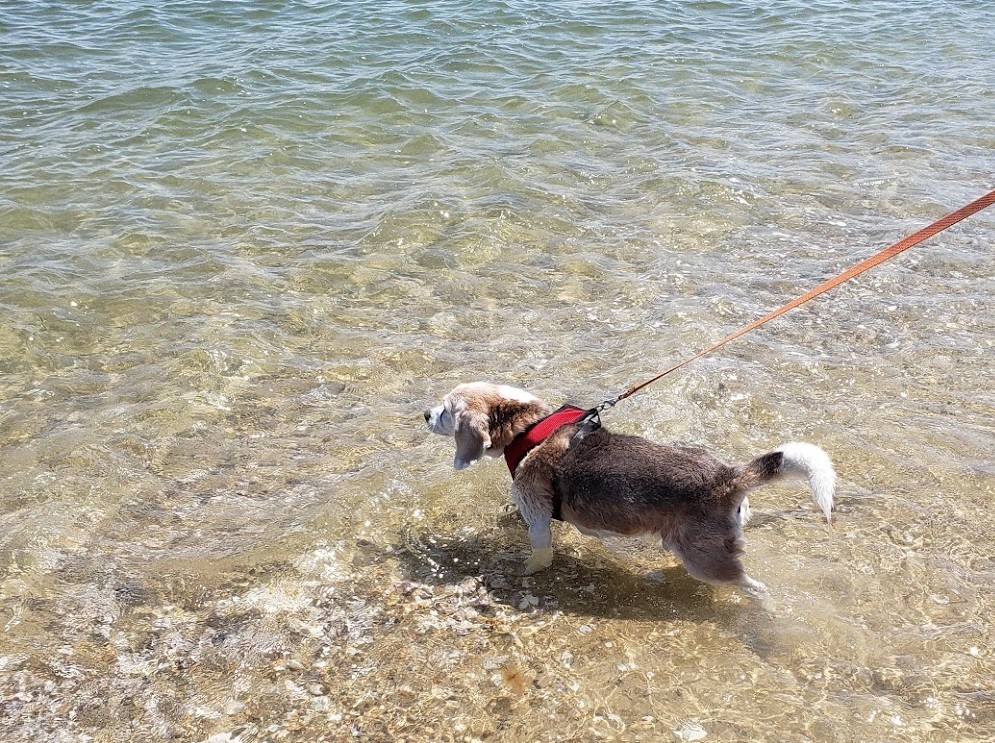 He painstakingly sniffed every inch of that beach. 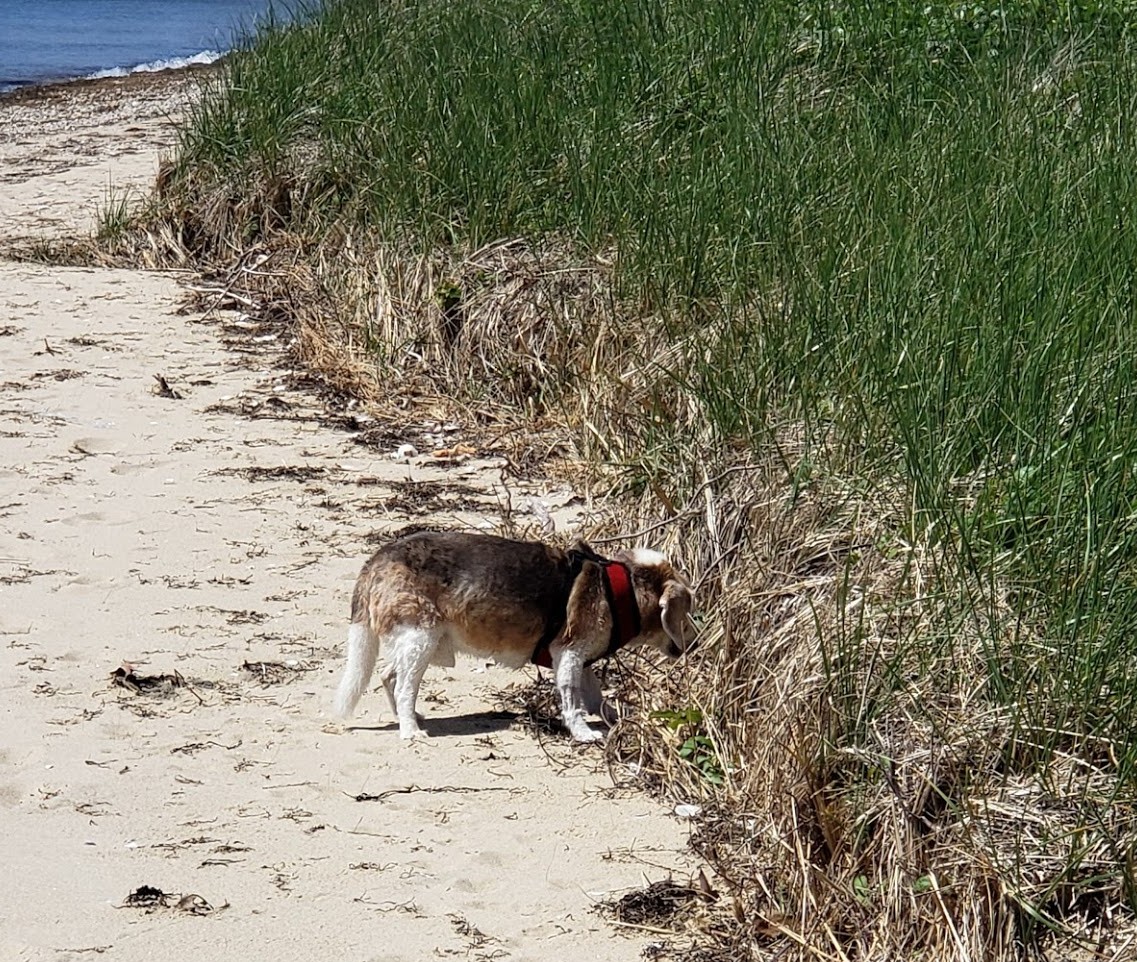 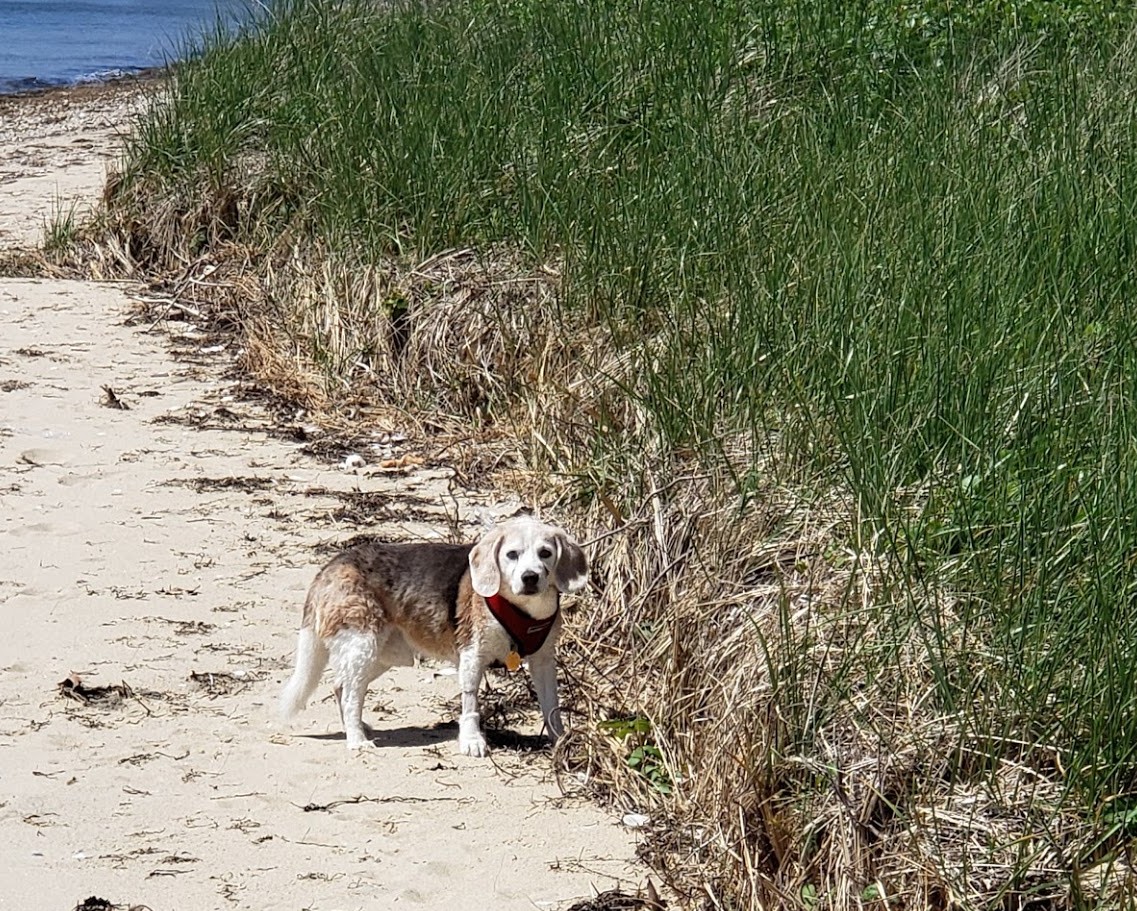 I fought back the tears, I wonder if this visit to Bassett Island will be his last.

“On one had I am so very sad at the idea he’s getting ready,” I replied to Mindy.  “But on the other hand, after 16 and a half years of service, I really can’t complain.  He’s had a great life, and all I want is to protect his dognity.”