How We All Escaped with our Lives

I think my birthday falls at the perfect time of year.  It’s March 4th, after the hubbub of the holiday season has died down, and just at the point where I am getting tired of winter and want to do something fun.  Todd has always made a big deal out of my birthday, and now our friends are getting in on the fun too.  See, they want to get out of the winter hibernation mode too, and are craving the adventure that spring and summer normally brings.

The thing about this circle of friends is that we have some crazy smart people in this group.  Todd’s a CEO, I’m an author.  Brian is a scientist and has a PhD in Immunology, Sean is a teacher.  Allie is a Marine Biologist and is studying to become a personal trainer, her husband Tyler is an engineer and he works on machines that hospitals use to detect seizures.  Nikki is a marketing director for an IT company, her boyfriend Shawn is a sergeant in the National Guard.  We have long joked about how epic it would be for all of us smarties to get together and do one of those escape room games.

You’ve heard about this, right?  Google it for your local city.  It’s a game where the participants get locked in a room for an hour.  During that hour they have to solve a series of riddles to get out of the room.  If you don’t solve all the riddles in an hour, then you lose the game.  One thing that I’ve found extremely odd when telling people that don’t know about escape rooms is their concern about what would happen if we didn’t solve all the riddles on time.  We laughed about it, because it’s not like we would end up locked up in the room forever.  That would be weird, right?  But I suppose it would be a great way for a cult to recruit.  You get stuck in the room, and now you're off to a camp in the desert.  But no, that's not what happens.  Really.

We rented an AirBnB in Boston, right downtown.  We packed extra bedding and the like, and then we booked not one, not two, not three but FOUR escape rooms over the course of Saturday.  We had ample break between them to eat, walk around, drink Todd’s legendary rum punch, laugh, etc.

We started at 10 AM, and solved that one in 39 minutes.  The theme of that one was a haunted church that had an archaeological dig component.  In all of the escape rooms we did, the clues led us to another room and another room until we managed to finally figure out how to get out.  For the second one we weren’t so lucky, we didn’t manage to beat that one.  This one was structured differently as we were separated into two groups and had to escape our respective rooms to the point where we were together and then we as a group had to escape the room we were all in.  Then we did a pirate themed one.  This one was weird because we weren’t really locked into the room.  At first we had to escape into the room and then escape out of the room, I think we did this in 40 some-odd minutes.  Then the final one we did at 11 PM, and we smuggled Todd’s rum punch into that one and had a bit to drink in the lobby, and we managed to escape in 50 some odd minutes.

I would love to tell you more about the rooms, but it would be extremely lame of me to give away all the secrets of the game.  The mystery of trying to figure out the clues is what makes doing an escape room fun.  The crew got into a routine where we would enter a room and immediately start scouring the room.

“Here’s a picture with a clock on it, that might tell us something.”

“A poem, everyone, come and listen.”

With all of us observing our surroundings out loud we managed to get a sense of everything in the room and then we could piece it together.  “Oh, Nikki didn’t you say you had that magnet?  I have this thing over here that might work with a magnet…”  Really you are in a room with seemingly innocuous things, and that’s what makes it interesting—trying to determine how each object in the room is significant.  And those objects, those icons painted on that picture, the code you determine from the numbers on a slip of paper, they might not be important in this moment right now but they will likely become important later on.  And at some point you get all those items into the correct sequence, and the door opens, and the lights flash, and the music plays, and you’ve solved the puzzle and you’re out!

And let me tell you, solving 4 escape rooms with this crew is just as awesome as I imagined it would be.  Thanks guys for making my birthday memorable. You guys are the BEST! 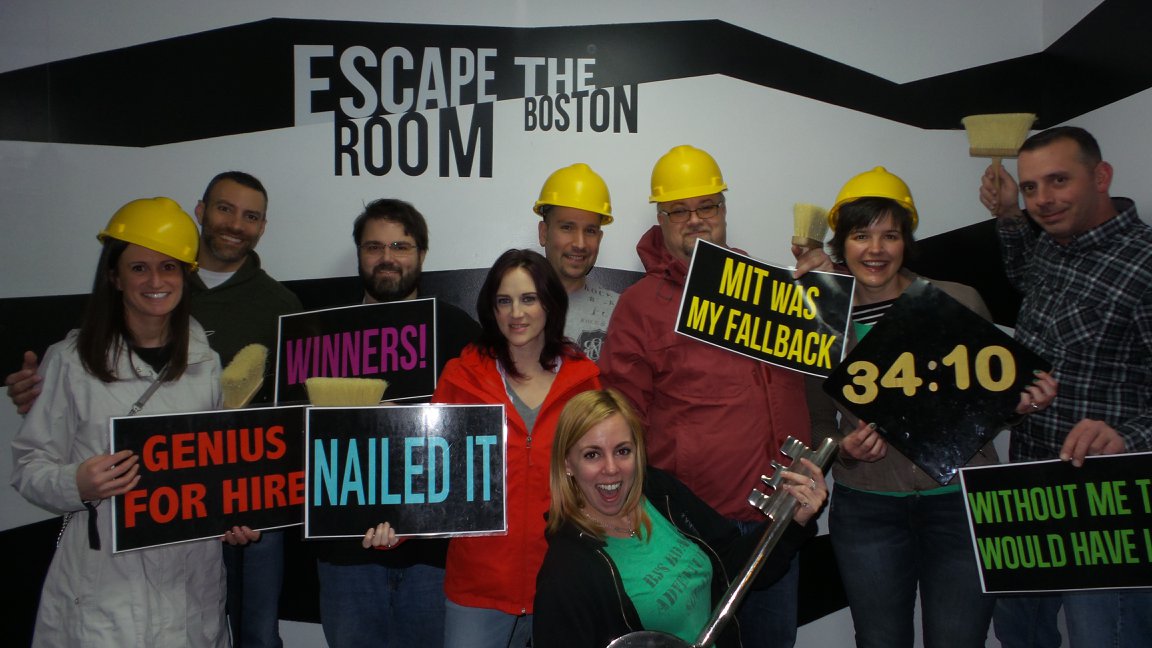 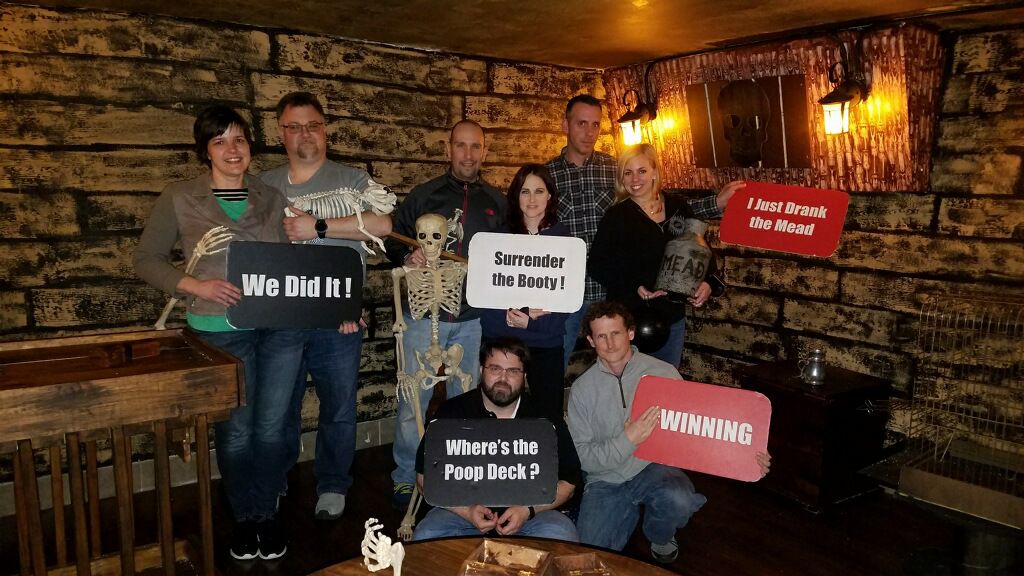 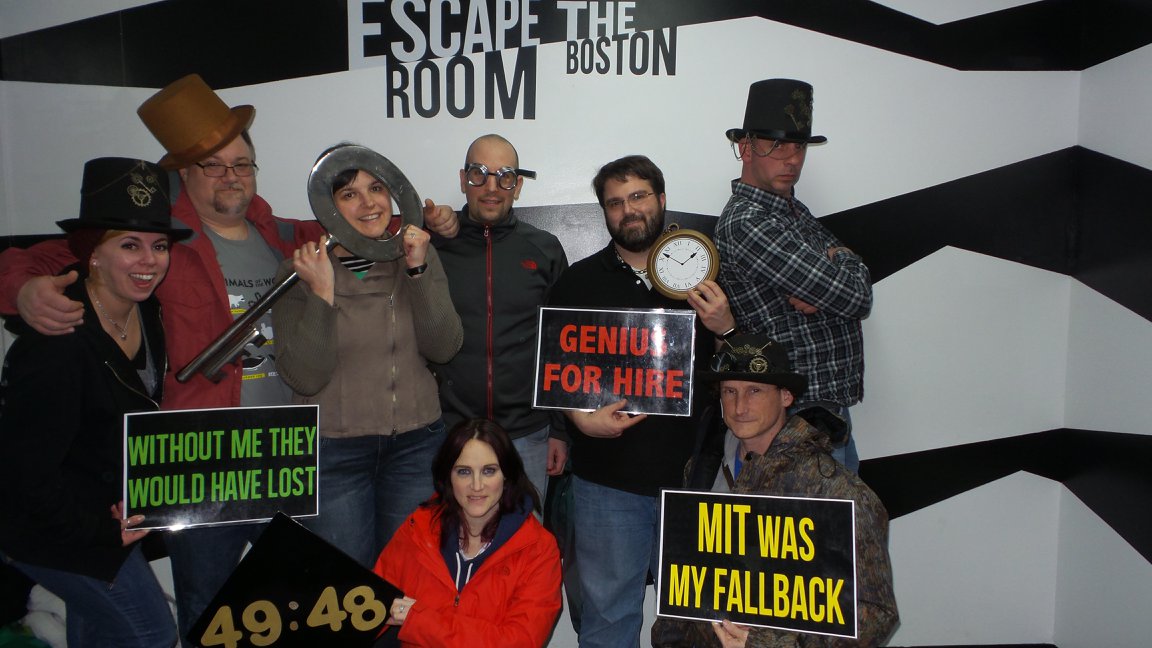