In a Past Life I Was a Lighthouse Keeper

I have this recurring dream, it happens very frequently.  In the dream Todd and I bought a house, but there’s a problem with it.  At the top of the stairs there’s a hatch that we have to crawl through to get to the upstairs rooms, like our bedrooms.  In the dream I crawl through it after the real estate agent, and then I crawl through it again after we move in.  But the problem is every time I crawl through the hatch it’s harder to get through it.  It’s lower to the floor, so I have to duck way down once I get to the top step.  Or it’s very high, so at the top step I have to jump and kind of dive through it headfirst.  Sometimes it just gets smaller.  But I am frustrated with it every single time I wake up from that dream.

I’ve asked others if they have a similar dream, and some of my friends have.  Then we get on to talking about the dreams we all have where we discover some hidden room in our homes where there’s some awesome feature.  In mine I discovered a room with a pool table in it above our garage.  The hitch was that Congress was in there playing pool and they kept trying to sneak into my house to use the bathroom.

But this dream about the hatch at the top of the stairs kind of bugs me.  What does it mean?  I googled it, and of course didn’t get much of an answer.  And how do you google that?  I’ve tried “Dream interpretation: annoying hatch at the top of my stairs” and variations on that.

Last weekend I finally figured out what this dream means.  My friend Mindy came to visit me for the weekend.  Mindy’s that friend I’ve had since I was 16, and I told the story about her here.  It was my turn to show her around, and I got us into the Save the Bay Lighthouse and Seal Tour.

Save the Bay has been doing this tour for a few years now, in fact I’ve been on it before years ago.  They run it from November through April when the seals come in and hang out around Newport.  When I did it last time we didn’t see any seals, as it was November and at the very beginning of seal season.  This time Mindy and I set out on the Save the Bay boat and they dropped us off at Rose Island lighthouse.  This lighthouse was decommissioned, but is owned and maintained by the City of Newport.  You can actually rent out the lighthouse and stay the night in it as a guest, which I think would be pretty cool.

But the best part of this trip to Rose Island was the moment I realized that I was a lighthouse keeper in a past life.  We got the chance to go out to the very top of the lighthouse, and to do so we had to climb up a winding set of stairs, and then at the top of the stairs was a ladder that opened to where the light is.  To go outside on the catwalk around the light I’d have to crawl through a hatch close to the floor.

I climbed the ladder and ducked under the hatch to get outside, and felt an overwhelming sense of déjà vu.  It was my dream all over again.  I had to climb out a hatch at the top of the stairs to get where I wanted to go.  I told Mindy about my dream and I looked at the hatch and blinked at it.

We laughed at it at the time, but the more I think about it, I wonder if A. whether I do have a past life and B. was I a lighthouse keeper in a past life that I may or may not have.

In this picture you can see the hatch at the top of the ladder, you have to duck through that hatch when going outside on the catwalk.  Just like my dream.  Just. Like. It. 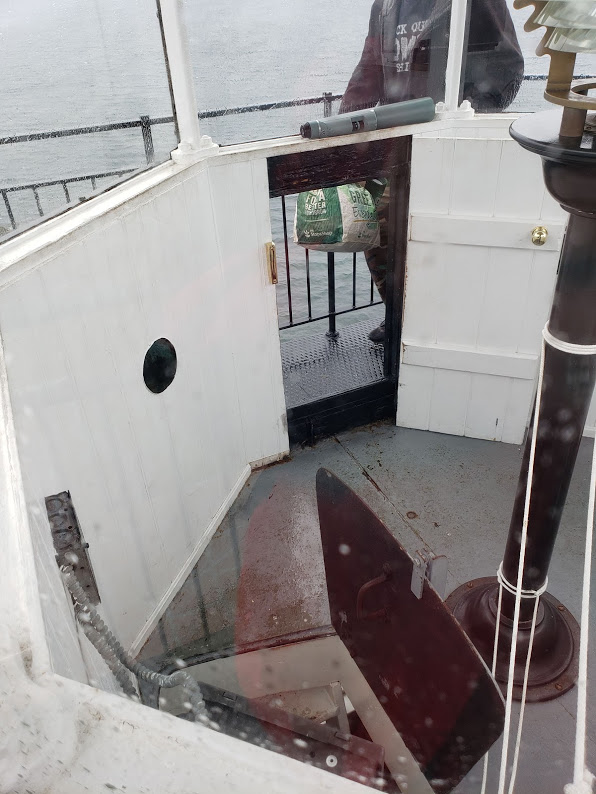 And we saw a few seals on Sighting Rock near Newport, RI.