My Night with the Barenaked Ladies

Todd goes to conferences pretty frequently, and a lot of them are these enormous conferences put on by gigantic tech companies like VM Ware, Dell Computers, Lenovo, and so on.  While he spends the days learning about the products that these companies offer, so he can do a better job of selling them to his clients, at night it’s a whole different ball game.  These companies throw massive parties and hire bands to come and play.

Years ago I went to Vegas with him to VM World, and The Killers played at the party.  Todd had gone one year where VM Ware rented an island in San Francisco Bay and constructed a replica of San Francisco on the island.  The whole island was the party, and they constructed buildings to look like the ones on the mainland.  Each building had a different theme and Smashmouth played that night.

He just went to the Lenovo conference, in Orlando, and I tagged along.  See, because I work from home at the day job I can work from anywhere.  So I worked from the hotel room, walked over to Epcot for lunch, and then at night I went with him to the Dolphin resort for the Lenovo party.

But the best part is what came next.

When I had first moved to the Boston area when I was 22, I showed up with my out of tune acoustic guitar, my flannels and my ratty jeans.  I scoured the Boston Phoenix for open mic nights so I could get out and play my original songs. Open mics were also a great way to meet people, in particular guys.  I used to pick up guys at the open mic nights, because I knew we already had a love of music in common.  I’d usually strike up a conversation with a cute guy and say “We should play together some time.”  Then we’d get together with our guitars untouched and end up making out instead.  It was brilliant, actually.

I went to one on Beacon Street at a joint called the Casual Cup.  It was one of my first times there, and the open mic was jammed.  I put my name on the list, and I religiously attended that open mic night every single Thursday night.  That’s where I met Mike.  I pulled my usual “Hey, we should play some time…” line.  And he was like “Yeah!  We totally should.”

Mike and I never ended up dating.  Our guitars stayed firmly in our hands, we never ended up making out on a couch.  We put together a set list of my originals and covers.  And it was Mike that introduced me to the Barenaked Ladies.

We covered a few of their songs, and my absolute favorite was “If I Had a Million Dollars.”  We had fun playing together, he kept me laughing, we’d banter—it was a lot more fun than playing on my own.  Musically it was pretty cringe-y, but it was with Mike that I used to open for Todd’s band after I had done it solo for so many years.  Mike and I called ourselves A Not Quite Folk Trio, and we thought it was hilarious because we were a duo and we were pretty folky with Mike’s bongos and my guitar and my insistence on wearing peasant skirts and playing shows barefoot at The Casual Cup--but we had to say we were not quite folk.  A man drew a picture of us on a napkin at one of our shows.  I framed it and I still have it.  Of course, I am in a peasant skirt and Doc Martens…. It was in April, too cold to be all barefoot and artsy and not quite folky but actually very folky.

I became a Barenaked fan.  I still listen to their stuff, even though it’s not 1998 anymore.  I’ve been to see them a few times, and the thing I always loved about seeing the Ladies was that they looked like they were having a blast up there playing, and I had this sense as they walked out onto the stage that they were surprised that we’d all shown up to see them.  Todd told me that Barenaked Ladies were playing the party at the Lenovo conference, and I wondered if they’d still have that sense of surprise about them.

He gave me his VIP pass.  I got to go backstage, and I thought we’d get to meet the band.  But I am not sure what happened with that, I think there was some miscommunication.  We got to stand backstage, and then get escorted into the VIP area right in front of the stage off to the right.  Todd’s co-worker Karen and I were in the VIP section, and Todd got right up front in the middle of the stage—so despite me being a fancy VIP we were only a few people apart.  But still, Karen and I were VIPs as we should be, because Karen is a badass and she is totally a VIP anyway.

I was the girl in the strappy red sundress right up front in a sea of men in sensible golf shirts.  I danced my ass off, bassist Jim Creeggan and I joked around, I sang along.  Jim popped into my selfies. 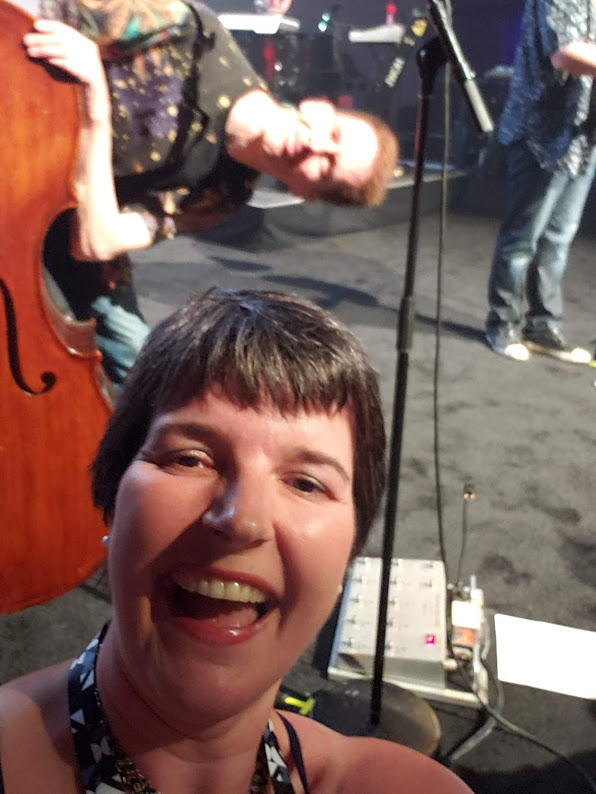 They played so many songs I knew, and I couldn’t help singing along.  And they were RIGHT THERE!  Right in front of me! 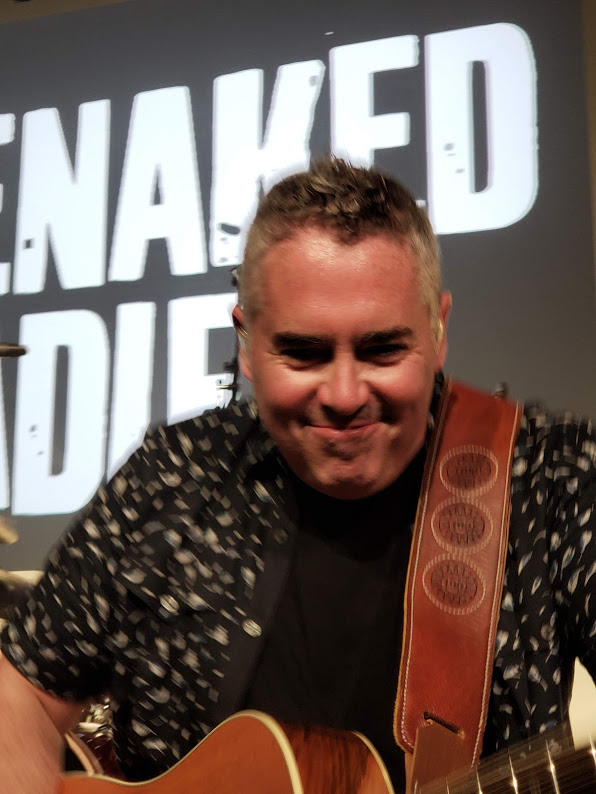 Toward the end of the set they played a Million Dollars, the one I covered in the Not Quite Folk Trio.  I was in heaven, singing along and dancing until Kevin Hearn jammed a mic in my face and I got to sing along.  The last time I got to sing along at a show was when I saw Angry Salad play at my college and they asked someone to come up and sing and I sang with them on a cover of Steve Miller’s The Joker.  I sang the harmonies with Bob Whelan, and he looked at me quizzically, “I picked the chick who can actually sing?!”  While singing an entire song with Angry Salad was cool back in 1997, it was epically cooler to sing one line with Barenaked Ladies.

At the end of the show I told Jim Creeggan that Geddy Lee could suck it.  And for me those are fightin’ words, as I love Rush.  But when Jim Creeggan completely scorched his bass solo on an upright bass during Brian Wilson…. I’ve never seen Geddy do anything like that.  But when I told Jim that Geddy can suck it he looked mildly horrified at the blasphemy and replied “Oh no, he’s really good.”

Thanks Barenaked Ladies for an awesome show.  I know it’s weird to play for a corporate event, but you guys brought down the house, and that show has kept me smiling for days.