Our First Ever Sailing Trip

Todd and I love to take our sailboat out, anchor somewhere or rent a mooring, and explore other towns from the water.  It’s how we vacation most years.  And it’s such a different experience sailing to a new place to explore than it is to just drive or fly there.  For starters, when we get ashore we have to figure out how to get around—whether it’s by taxi, public transport, walking or renting a moped.  If we buy something we pretty much have to carry it around until we get back to the docks and get out to the boat--whether it’s on anchor or on a rented mooring.

We prefer to anchor, as it’s free.  But that can be challenging in itself, as we have to figure out the best places to set an anchor.  Renting a mooring is another option.  Basically we are paying for the privilege of tying up to an anchor that’s already set into the ground.  We prefer these options over tying to a dock for a number of reasons.  The first is privacy.  When you’re tied to a dock, there are other boats also tied to the dock, and there are also people walking around on those docks.  We also have dogs.  Dogs like to wander off the boat and go check out what snacks may be had on other nearby boats.  Nemo once helped himself to the dockmaster’s lunch at a marina we were visiting years ago.  On a mooring there’s more privacy, more security, and less chances of my dogs embarrassing us.

Our first boat was a 26’ Pearson Commander.  It was donated to the Boy Scout Council in Vermont.  When Todd and I met, he was still involved with the Boy Scouts, and he bought the boat off of the Council for very short money.  Then we spent an entire summer fixing it up.  It was left to rot in a field on the southern tip of Lake Champlain in Vermont.  It was infested with wasps.  Todd and his cousin Jason removed all the wasps, as I have a completely irrational fear of them, and then we set about repairing the boat.  I painted the interior.  Todd built a rudder, as the boat didn’t have one.  The rudder is the plank under water that pivots side to side, and is how you steer the boat.  You can’t sail without a rudder.

Then we set off on our first sailing vacation.  There wasn’t much room inside the Sugar Magnolia, which is what we named this boat.  There were 4 bunks.  But when we had other people sail with us, and it was crowded as hell with 4 people.  We put a toilet in, and a waste tank—as it’s illegal to discharge human waste into the water.  We didn’t have a shower.  We had a solar shower.  It’s a plastic bag with a black side that is designed to soak up the sun’s rays and heat the water.  Instead of the shower being ice cold, it was mostly cold.

We set out from Chipman Point in Orwell, Vermont and headed north on Lake Champlain.  We passed Fort Ticonderoga, and then headed under the Crown Point Bridge, at which point the lake widens to the point where it looks less like a river and more like a round lake.  Sugar Magnolia had a 9 horse outboard engine.  To give you an idea of how far we’ve come in our sailing equipment, our dinghy for our current sailboat has a 15 horse outboard engine.  We used the 9 to power the boat, and it was slower than weight loss.  We actually sailed quite a bit on that boat, because it was usually quicker than using the motor.

But the thing with sailing on Lake Champlain is because the lake is so long and narrow the wind typically blows from the north or from the south.  If it was blowing from the north, and we were heading north, then we had to sail in a zig zag pattern back and forth across the lake to make any forward progress.  This is why it took us forever to get anywhere on that boat.  I remember one Sunday taking 8 hours to sail back from Port Henry.  But then I drove back to pick up a car we’d left there.  It took 45 minutes to drive there.

We were so excited for our first extended trip aboard.  We didn’t care about the lack of a shower.  We packed minimally, knowing that we’d probably live in our bathing suits.  We took the entire 10 days and sailed all the way to Burlington, Vermont and back.  To put it into perspective, it takes just over an hour to drive that distance.

Once we arrived in Burlington, we tied up to the dock.  We didn’t have dogs to worry about and enjoyed the convenience of the dock.  We shopped.  We ate out, instead of eating canned soup and peanut butter and jelly sandwiches for dinner.  We walked all over Burlington.  We stayed for a few days, and then untied the dock lines and headed back south.

I don’t remember where we were anchored.  I think it was somewhere near Vergennes, Vermont.  We got the forecast from the detached sounding automated voice on the VHF radio.  We had to listen to it cycle through the entire routine of the marine forecast before it got to the part that described our location.  We knew the wind would come from the north, so we tucked into an anchorage on the Vermont side of the lake, sheltered by the land to the north.  We swam, we showered—which involved Todd holding the mostly cold solar shower over my head and my shivering through my shampoo—we probably ate something like instant noodles.  Then we settled into our bunks and went to sleep.  This was before smartphones and iPads.  I brought actual library books with me, instead of reading from my Overdrive or Kindle apps.  We played cards.  We listened to music that was on CDs we’d brought, as streaming wasn’t a thing yet.  We had to bring batteries for the CD player.  He had a Nextel cell phone then, and had very little signal.  He checked in with the office from payphones.  And it was blissful.

And then we woke up the next morning and learned the wind had shifted.  We weren’t prepared for that, and fortunately the anchor held.  But the problem we were having was that some ropes had gotten wrapped around the propeller of our little outboard engine.  We tugged at them from inside the boat as the wind whipped the waves into a menacing frothing mess.  I considered jumping in, diving down and unwrapping the lines. So did he. We couldn’t pull up the anchor and leave that spot until the ropes were untangled.  We feared dragging our anchor and running aground.  I flicked the lines from one side, while Todd flicked another line from his side.  We flicked them and felt them loosen.  Encouraged we leaned out further and flicked harder and quicker.  Finally the ropes unwound themselves from around the propeller.  We let out a cheer!  I started the engine while he pulled the anchor up by hand.  We fled the scene of what was our scariest weather episode to date.  (Years later we’d be caught in storms, even a category 1 hurricane, but that’s a story for another blog entry.)

When we embarked on this trip we were only together for three years.  It was the summer of 2000.  I had just started my Masters degree.  I was 26, he was 24. He had only started his company, Envision Technology Advisors, two years before.  We lived in our second apartment.  I didn’t know it, but at the time he was saving for my engagement ring.  A few months after the trip Todd would propose and I said yes.  We came off the water on that trip knowing that we were addicted to traveling by boat.  We came off the water knowing that we could work together and sail a boat up and down a lake, mostly in the middle of nowhere, and get along.  We returned home to our apartment just south of Boston and knew we wanted to explore further, we’d want a bigger boat.  We had bought our next one off of eBay.

But most importantly we learned that we could work as a team.

This is what bath time aboard Sugar Magnolia looked like at the time. 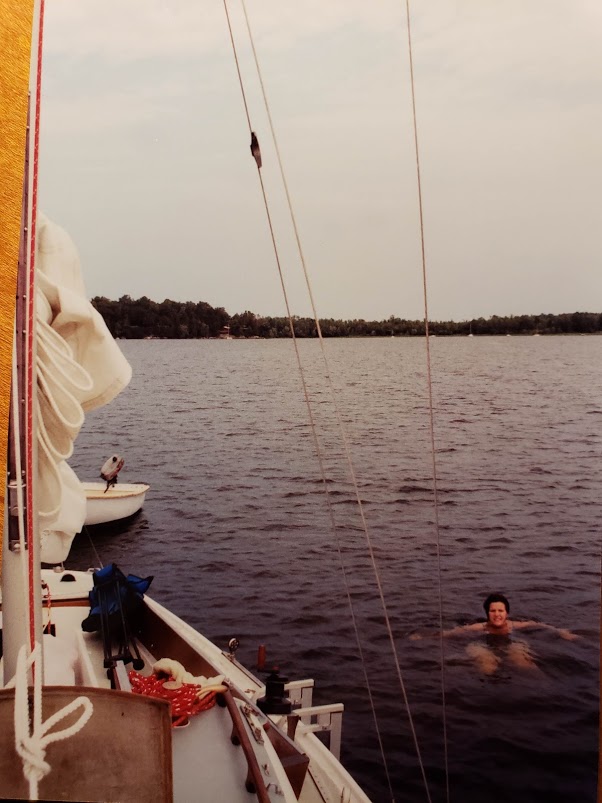 I loved that bathing suit.  I also thought it was cool that I could sail a boat with a tiller rather than a wheel. 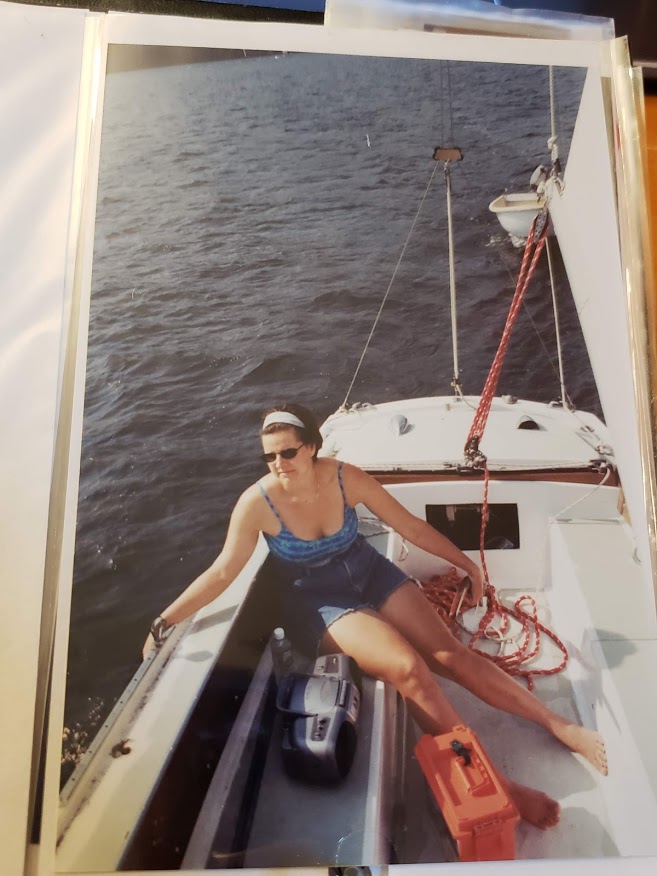 Sunset in Burlington, with our new to us dinghy. 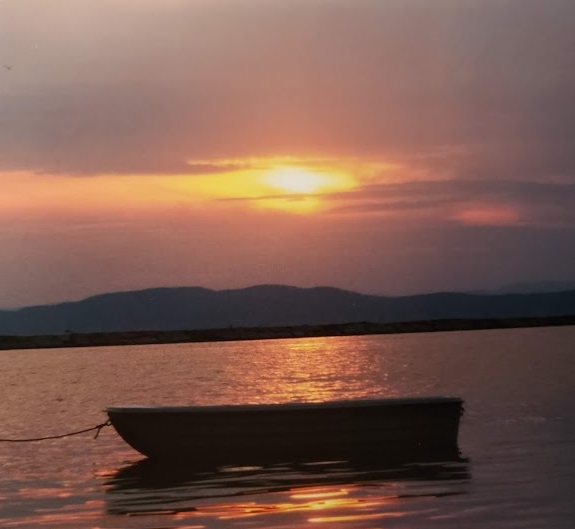 Todd lounging in the cockpit. 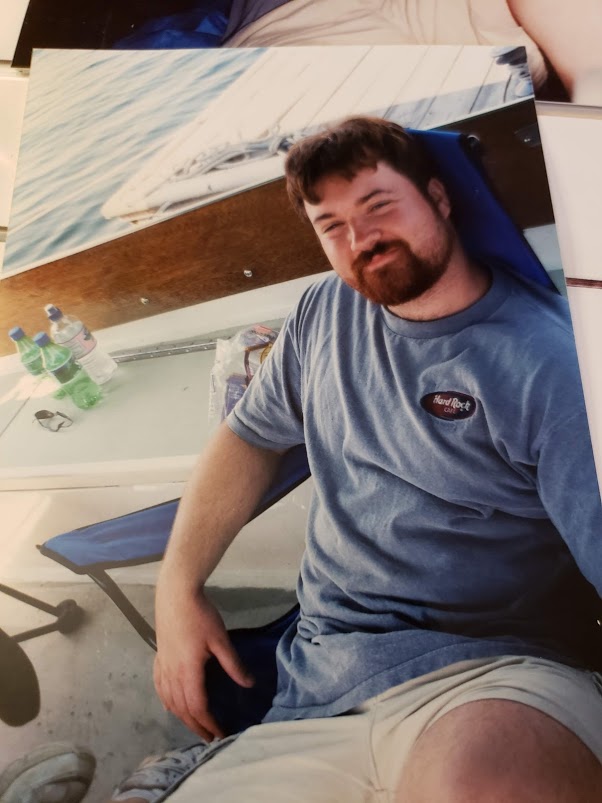 Todd setting our anchor for the night in Partridge Harbor.  He tied either end of the boat to trees on shore. 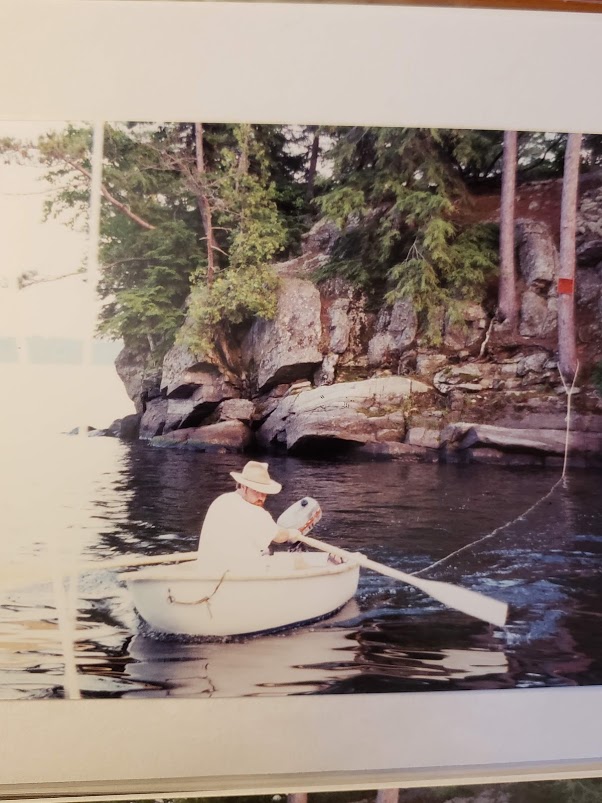 And this was that menacing windstorm.  Shut up, it was scary. 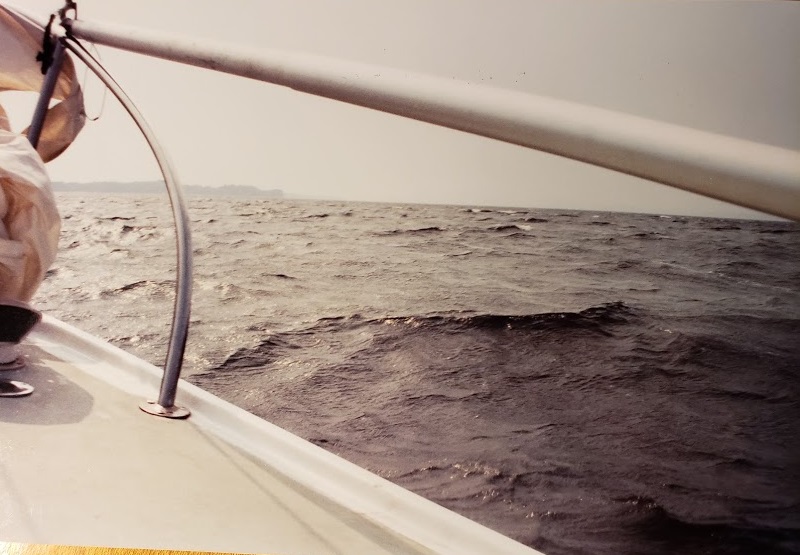