The Big Sailing Trip Part I

As I mentioned in my blog post Preparation, we bought a new boat and just last month sailed it from Fort Lauderdale, Florida to Rhode Island.  Preparing to travel 1,213 miles was a huge undertaking for us, as we wanted to cover as many bases as possible and make the trip offshore and on overnights as safe as possible.

We set out on the trip toward the end of June, and originally planned on setting out on June 20th.  June 20 is actually a big date for us, as it’s when Todd and I first kissed and first became a couple 22 years ago.  It was a new beginning for both of us, and I thought it was kind of cool that this trip would start out as a new beginning with our new boat on that date.

During the week we still had a lot to do.  I worked from Florida on Monday, Tuesday and Wednesday.  Todd took those days off and set about doing some last repairs and upgrades.  The weekend before we installed the Iridium satellite antenna so that we’d have the ability to communicate offshore if we needed to—as our cell phones wouldn’t work 100 miles off shore.  I grocery shopped on Monday morning, and separated out the foods that would need to be frozen and pre-portioned them into single serve baggies to prevent waste.  The shopping cart overflowed, yet I am proud to say that I did not end up using a single disposable grocery bag—I had brought all of my own reusable bags which is something that is very important to me.

This is just some of the food we bought.  There was more in the fridge, the freezer, and other cabinets under the sink and stove. 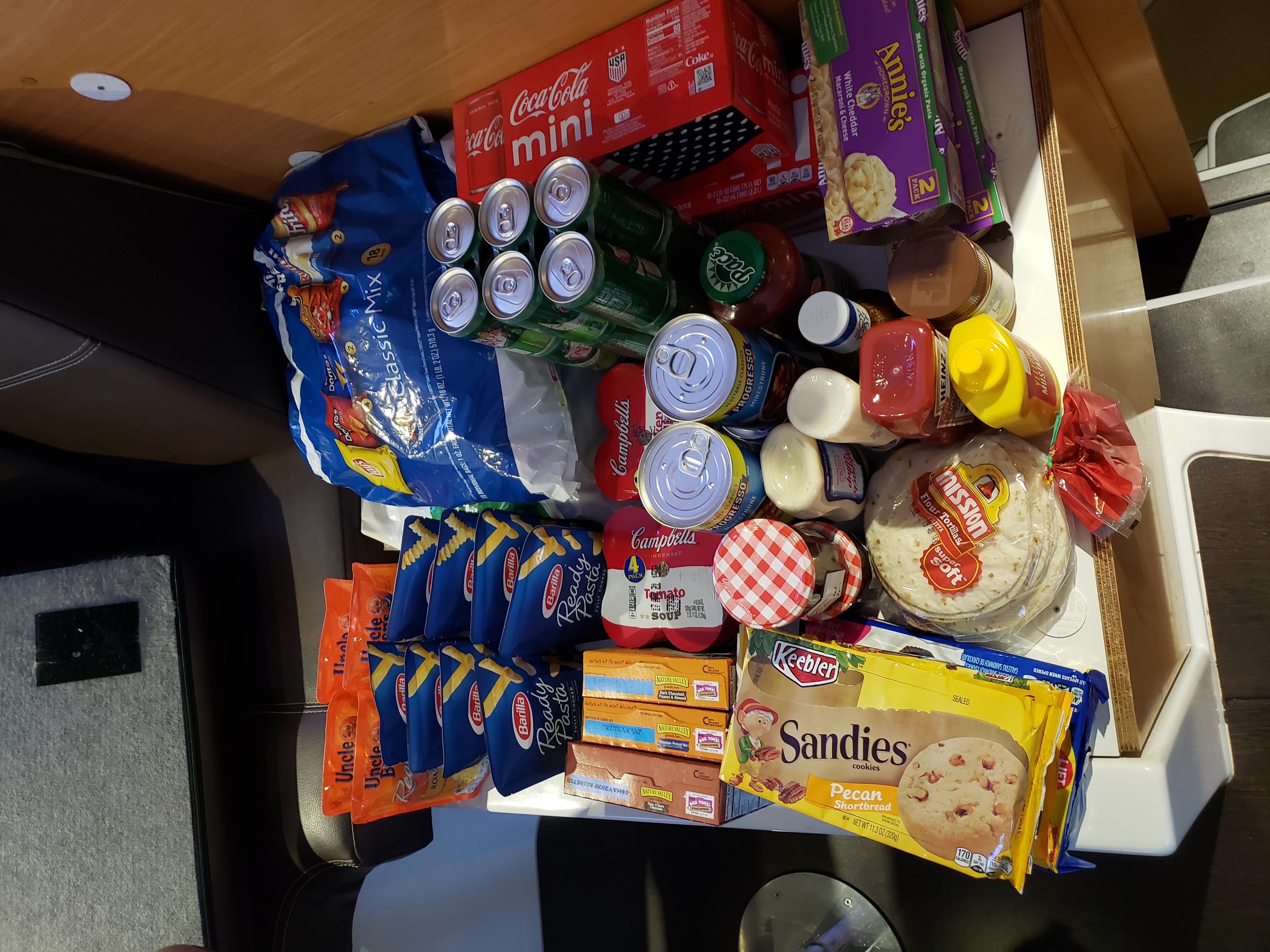 When we bought the boat it was docked behind a house in Fort Lauderdale.  The neighborhoods close to the Intracoastal Waterway have canals behind the houses where the homeowners can dock their boats.  Then they can steer them into the waterway, and under one of the many drawbridges and out into the ocean.  Where our boat was docked was between the Las Olas and the 17th Street bridge.  The 17th Street bridge is near the commercial port where the freight and cruise ships dock.  One of the conditions of keeping the boat docked behind this house was that we were not permitted to stay overnight aboard at the house.  Whenever we went to the boat we’d park on the street or off to the side of the driveway, open the gate to the left of the garage, make our way along the side of the house to the dock in the back.  The dock was adjacent to the pool and patio of the house, where I’d seen the owners of the house lounging and eating dinner under the covered patio.  We said hello, they were friendly people with two little puffy dogs, and then I’d step aboard.

In preparation for the trip I’d need to arrange for another dock space where we’d be able to stay aboard.  I arranged for a slip at Pier 66 South, which is just south of the 17th Street bridge.  My logic was that we wouldn’t need to wait for the bridge to open whenever we wanted to leave.  We could just untie and leave.

This is what the 17th Street drawbridge looks like.  It opens every half hour, and with our tall masts we'd have to wait for it to open. 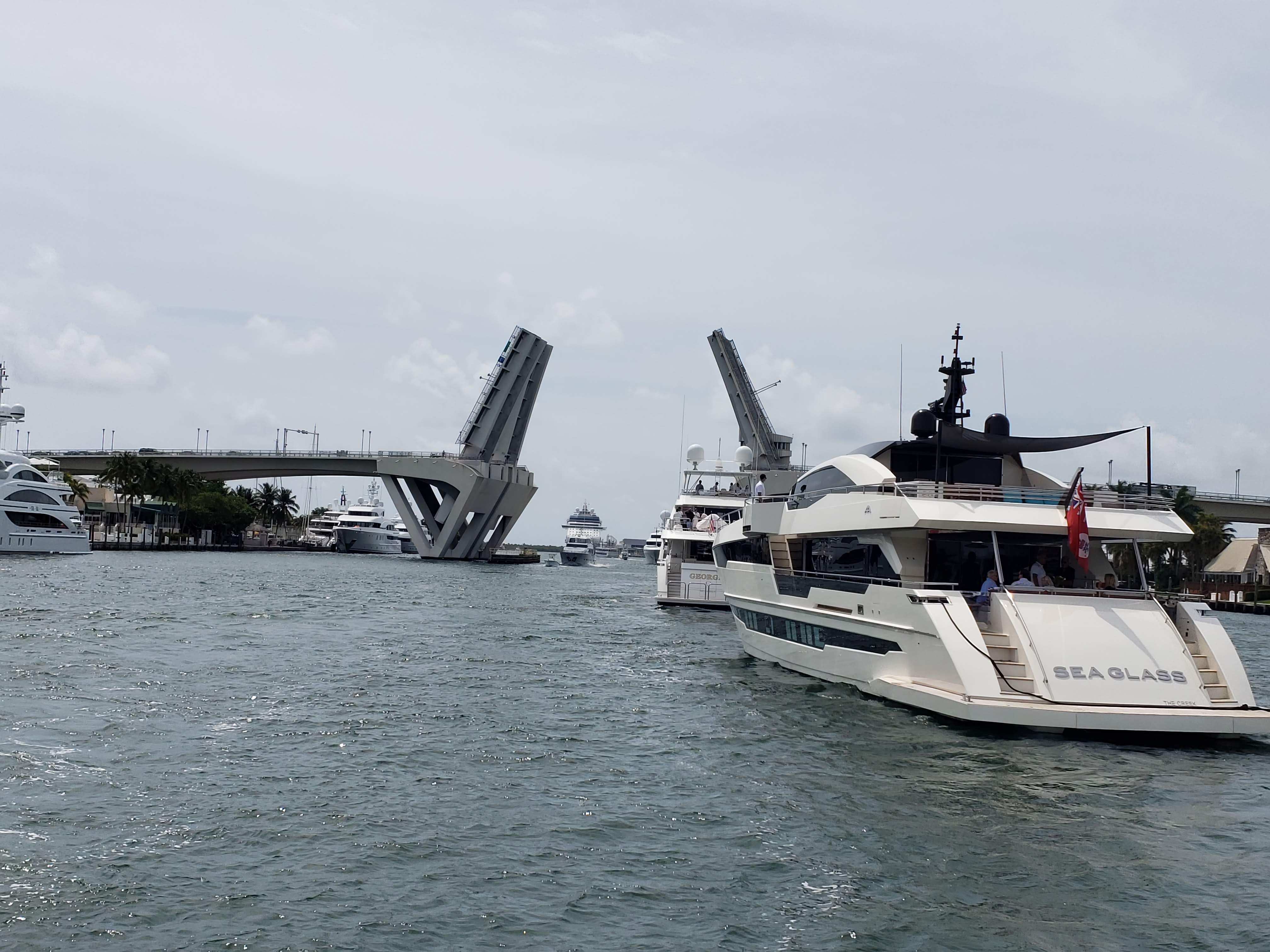 Wednesday June 19, 2019
We moved the boat from it’s dock where we were unable to say overnight to the Pier 66 Marina just south of the 17th Street bridge.  We did some light cleaning while we waited for our crew members Sean and Deb arrive.  Their plane would arrive around 7 or so and I planned to go pick them up.  The first thing I had to do was to get an Uber to take me from Pier 66 to the old slip we had.  It was just over a mile away as the crow flies.  But let me explain the phenomenon of the Florida mile.  Traffic in South Florida is pretty congested.  We have found that traveling 3-5 miles could easily take 30-45 minutes due to the seemingly constant traffic, hence we call them Florida miles..

I had planned to just walk to the house where we’d left our car.  I have run a marathon, surely I could handle walking just over a mile.  But here’s the thing about South Florida in June.  It is hot.  It is humid.  In Rhode Island I can walk a mile without barely breaking a sweat, even in the peak of summer.  This is not the case in South Florida.  Todd convinced me to get an Uber.

The marina was great about sending instructions for how to access the facilities in the marina, but one thing they neglected to do was to give me the code for the security gate.  I strolled up to the gate, there was a keypad, I had no idea what the code was.  My Uber idled outside the gate, and I was locked inside without a way to get out.  I called the phone number for the hotel that was part of the marina, but the hotel was undergoing renovations and nobody was answering the phone.

I managed to convince the Uber driver to head across the street to the hotel and see if he could get the code.  He spotted a security booth and headed over and managed to free me from jail.  I retrieved my car and then went to the airport to pick up Deb and Sean.

Originally the plan was to educate them on all the systems on the boat that night.  But as Todd was making the list it grew long.  It was almost 9 PM by the time we got back from the airport—Todd had gotten us some pizza and we instead opted to bond as a crew, as trying to teach everyone something new at 9 PM wouldn’t work.

Thursday June 20, 2019
Thursday morning was learning day.  Todd took us through all the systems—how to use all the navigation electronics, safety gear, where the food is stored, we spend the day learning the route and how we will do it safely.  Learning was fun, and even though I’d been aboard quite a few times since we signed the papers in March I still learned quite a bit.  The learning took up most of the day.

Great.  We’re ready to set out and we have a leak.

He traced the pipes back from that point and finds a leak at the fresh water intake for the toilet, he touches the pipe junction and they come apart in his hands.  He spends all afternoon replacing the part and it was a very frustrating fix: once he fixed one thing he broke the next thing in line.  Three trips to West Marine and Home Depot did the trick.  Luckily we still have our car at the marina, and we haven’t dropped it off at the house yet.  We managed to get it fixed, Deb and I mopped all the water out of the bilge.  We closed it up and went back to the house to drop off the car and go for a swim in the pool, we grabbed some Indian food for dinner and some extra to freeze and take with us on the trip.

Friday June 21, 2019
This was the day we were going to set out.  But first we had to go back under the 17th Street drawbridge to get fuel.  Deb and I filled the potable water tank before we left the dock.  We carry 140 gallons of fresh water, and we have a water maker which desalinates sea water and makes it potable.  We also bought an extra 20 gallons of bottled water just in case we weren’t able to get fresh water.

In the process of motoring over there, the steering on the boat doesn’t feel right.  Because it’s a catamaran we have 2 rudders, one on each side of the boat.  The rudders are flat pieces of metal, roughly the size of a baking dish, that will move left to right depending on how we turn the steering wheel.  The wheel turned, but the boat didn’t turn—which meant there was a problem with the rudder.

Because the boat has 2 engines, Todd was able to toggle both engines to steer the boat into the dock—which was incredibly impressive!  We manage to get the boat to the dock to get our fuel and an ice cream.  We motored back to our dock space on the south side of the bridge where Sean jumped in the water with a snorkel to look at the rudders.  He reported that the port side one is straight, the starboard one is pointed to the right.  Todd opened the compartment just above the rudder to take a look—he has such an amazing engineering mind that he can largely figure out how just about anything mechanical works.  He suspects he knows what’s wrong and how to fix it—however he was hesitant to try it in case he was wrong.  We called our broker at Just Catamarans, and they sent a repairman over.  He managed to arrive in no time at all and he showed Todd how to fix the problem.

While the repair man was there the potable water faucet at the sink stops working.  The repair man checks that out and realizes that we need a new water pump.  He calls in to the shop and they tell us that there are currently 5 of that model at West Marine.  Todd jumps into an Uber and goes to West and the hardware store to get gear.  Again this is one of those repairs that requires 3 trips to the store to get fixed, and Todd spends all afternoon repairing it.  He sweated over the repair despite the fact that we had the air conditioning in the boat running.  (Yes, this is a thing, our boat is air conditioned.)  We learned that the pump that was installed was barely a year old and it’s a mystery as to why it failed.  Because Todd and I have restored a few boats together we understand how to install a potable water pump. We’ve done it before.

This is Sean creatively blocking the sun while Todd is lying down on the bench to repair the water pump that is hidden behind the bench. 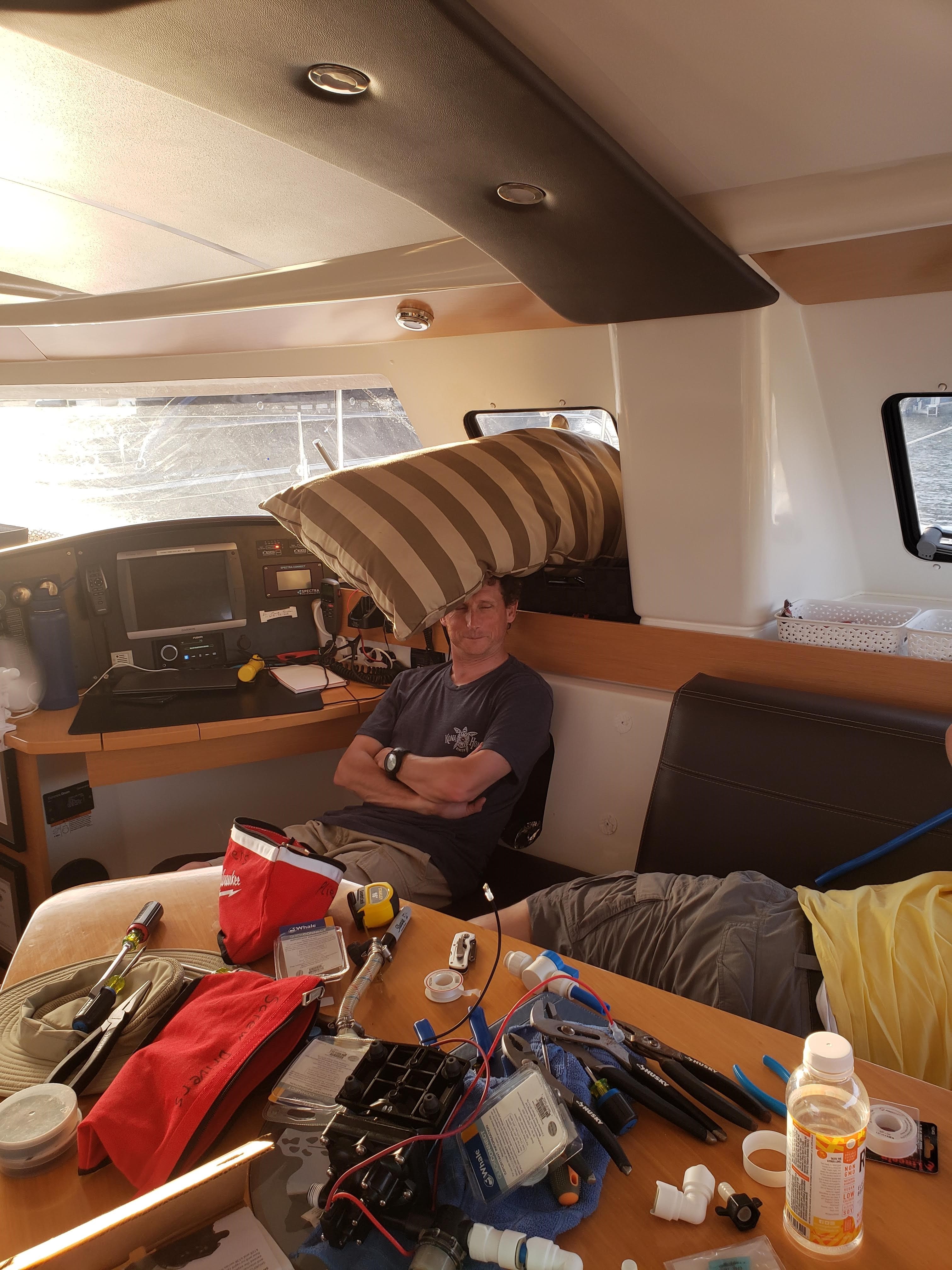 Hopefully this will be the last of the repairs so we can set out tomorrow.

Check out the next installment of the trip here.