The Last Roll of Film

Last fall Todd and I cleaned out the area of our basement we call the gear room.  It has our scuba gear, camping gear, boating gear, all kinds of gear.  It also has his wine collection.  Over time it got super messy in there, to the point where walking to the back of the room was impassable.  I was embarrassed any time we had people over and Todd took them down there to pick out wine.

We Marie Kondo-ed this room before Marie Kondo became all the rage.  We didn’t ask if things brought us joy.  Instead we pointed finders and asked “What the hell are you even keeping this for?” We carted bags of things to the donation bin down the street.  And then there was a pile of items I placed on a shelf and listed to sell on Facebook Marketplace.

I love to sell things on Facebook Marketplace.  I’ve done it quite a bit.  I’ve worked out methods for making sure I’m not getting scammed.  I don’t accept checks, cash only.  I meet my buyers at public places, typically at the police station.  I list my items and then my phone blows up with Facebook Messenger dings with people who are interested in my items.  Inevitably I get people who offer me less than half the asking price for my item.  The conversation normally goes like this:

I don’t get why adding “cash” to their offer is supposed to make it more enticing.  Like, I’m not going to accept bitcoin.  But if someone’s willing to offer me magic beans in exchange for my old sail winches I might consider it.

One day over the winter I got a response on an old hand held jig saw I posted for $10.  Todd and I were going to be at the marina all day covering Sabine for the winter.  The guy who responded to my listing had the username King Pukie.  He sent me a message through Facebook messenger to tell me he arrived at the marina.  I told him to look for the white Chevy Silverado pickup truck with the cap on the bed.  He told me to look for the tan Camry.

Sure enough, I saw the tan Camry.  And then I said the one of the most awkward things I’d ever said to someone.  But in the Facebook Marketplace world something like this is completely normal.

I walked up to the car “Excuse me, are you King Pukie?”

“Yes I am,” he smiled back at me.  Are you proud to be called King Pukie?  We walked over to an electrical outlet so I could plug in the saw and demonstrate that it works.  He handed me the $10, I gave him the saw and then King Pukie drove away.  My Facebook Marketplace exchanges typically look like this.

One of the items I listed for sale is my film camera.  I don’t use film anymore.  I think my 80 year old Dad is one of 8 people left in the world who still uses film.  I changed the battery on the camera and noticed that there was still a roll of film in it.  When did I ever use this camera last?  I haven’t used it since we lived in this house, and that’s been almost 11 years.  What could possibly be on this film?

I dropped it off at CVS.  CVS doesn’t even have the in house film developing machine anymore that’s how long film’s been out of the picture.  They have to send out your rolls of film now.  But when I got the pictures back, a week later, they included a DVD of the pictures.  I remember when that was an extra thing you paid for back when I was getting film developed.

When I opened the envelope I saw that there were pictures from a party I think we threw in 2007.  It was February and Todd and I decided we’d throw a Caribbean themed party to chase winter away.  We decorated our old house with palm fronds and inflatable jungle animals.  We bought coconut bikini tops and grass skirts that we’d all put on over our jeans and sweaters.  We slung leis over our friends’ necks as they came in.

But the thing that really struck me was the people in the pictures.  David and Tonya were there, they aren’t together anymore.  They’ve since divorced and married other people.  David lives in Virginia now, I think?  We still bump into Tonya here and there.  John and Jen were in the pictures too.  Jen fell off of our map when she was diagnosed with cancer.  John stayed at her side through it all.  Cancer finally took Jen in 2017.  It took it a good 10 years to take her, as Jen was such a badass.

Every so often we’d bump into Jen.  But it was awkward.  I think she was trying to distance herself as the cancer slowly did it’s terrible job on her.  John held a memorial for her at the yacht club.  We aren’t members, but he is.  We nibbled on cheese and crackers, looked at pictures of her and remembered her.  Her elderly parents flew in from Kansas, we hadn’t ever met them until Jen died.

Jen was on this roll of film.  It was just after she and John had gotten married.  Before cancer would point it’s gnarled finger at her.  She was gorgeous and full of life, smiling her beaming smile in the picture.  She's on the right and Tonya is on the left. 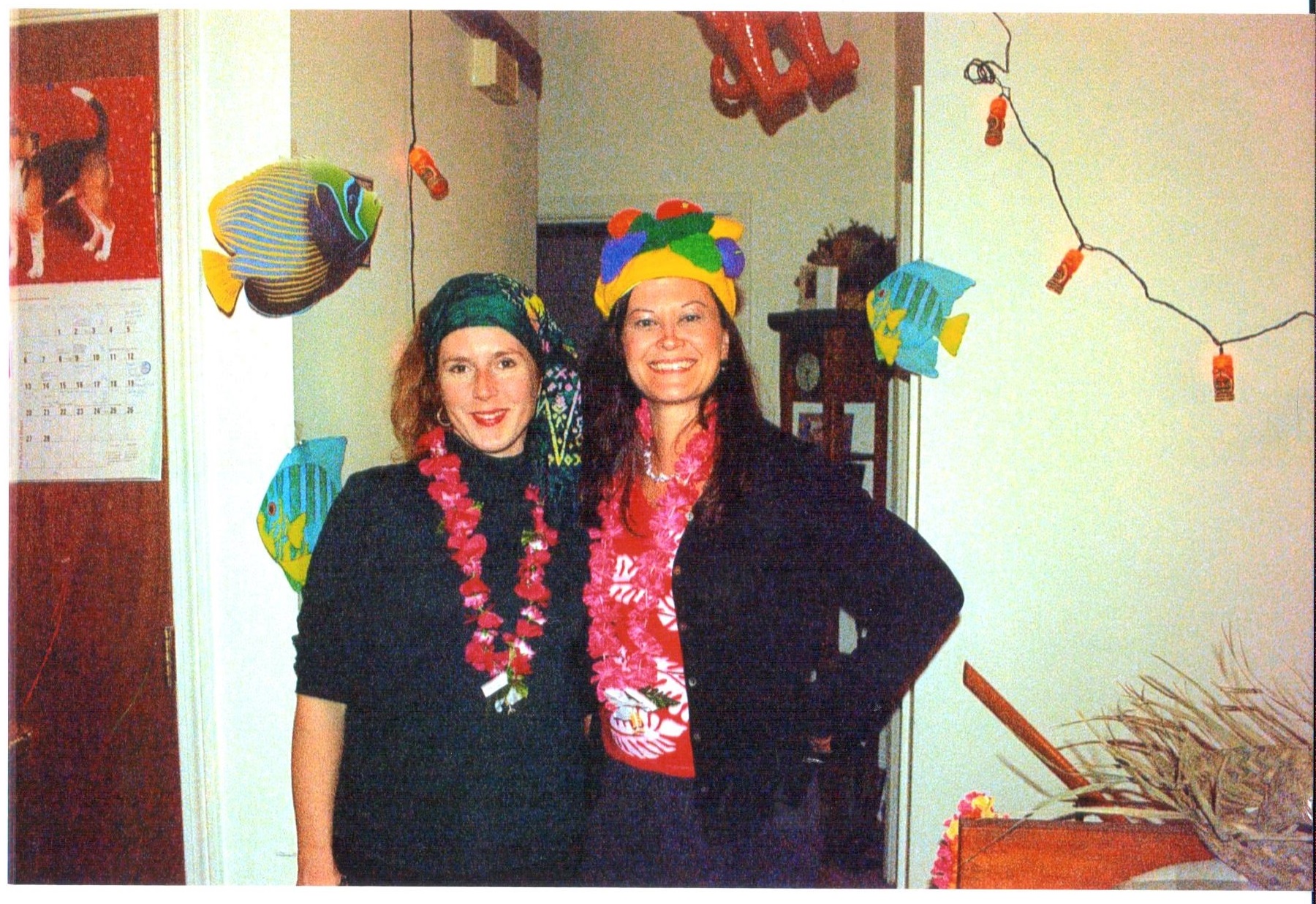 I have thousands of pictures stored in my phone.  But there’s something very different about holding a print from film in my hands.  It brings me back to that cold day in February, when our friends gathered with us to help us stick a middle finger up at winter and drink rum punch out of coconut cups.  It’s evidence that these people existed in my life, that this party happened.  I am thankful to have known Jen, if only for a little while.