On July 18, 2020 we said good bye to Nemo, our beagle.  We brought Nemo home on New Year’s Eve in 2003, just 4 months after we’d gotten married.  We already had a lab who was almost 2, and Nemo and Griffen quickly became best friends after a short period of adjustment. 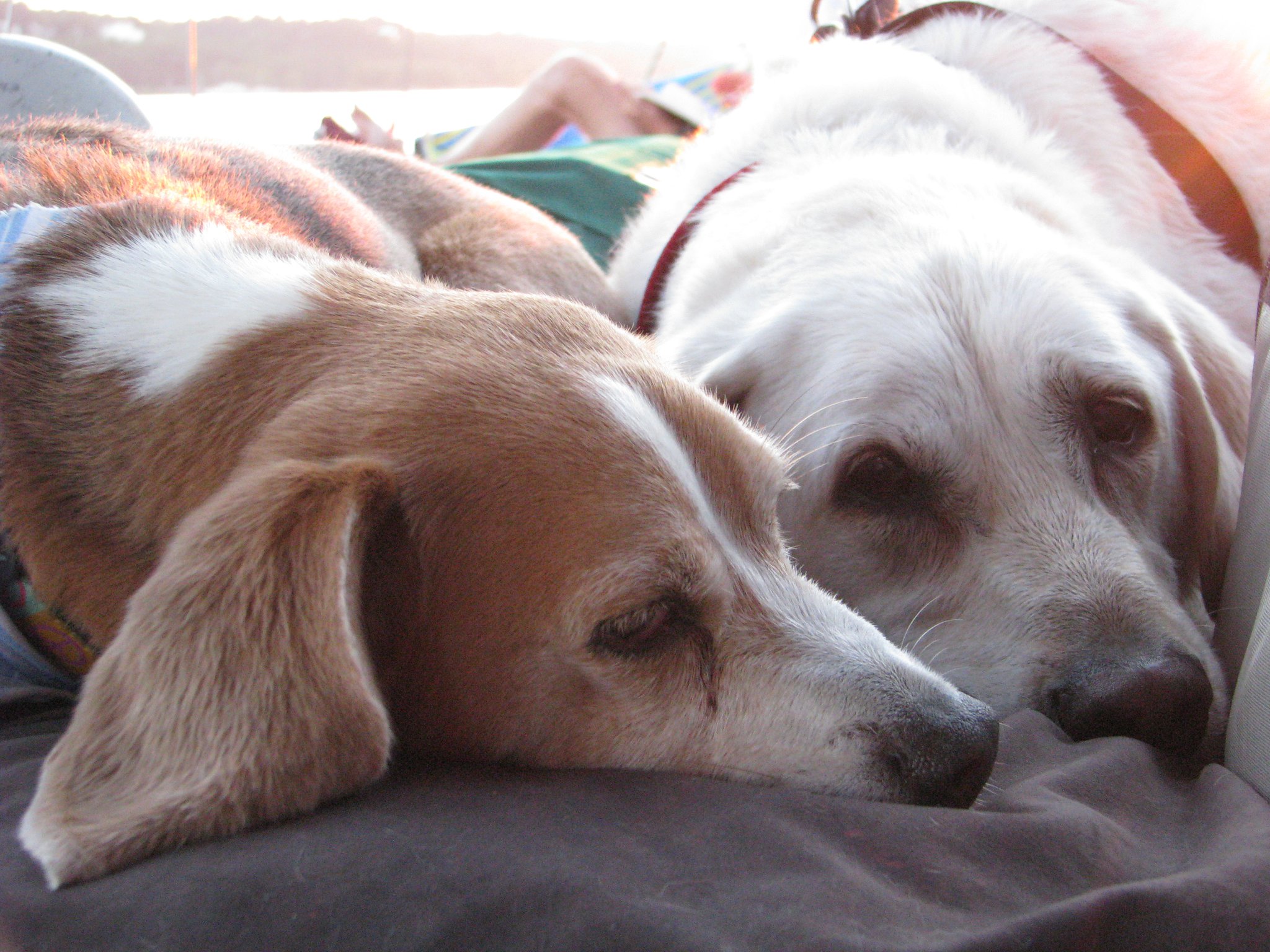 On the day we said goodbye we debated whether it was time.  Todd woke up to tell me that he’d been up with him through the night as Nemo coughed and gasped.  His last few months of his life we knew there was something going on inside his lung.  We didn’t want to do an exploratory surgery to find out what it was, due to his advanced age of 16.  He was prescribed Viagra to help relieve the pulmonary pressure.  But over the few months since he started the Viagra we knew it would get worse.

“I think it’s time,” Todd said that Saturday morning.  “I think he’s ready.  He looked so miserable last night I think he was telling me he’s ready.”

I think we were ready too.  We always swore that our dogs would have the best quality of life possible.  He wasn’t suffering.  He didn’t seem to be in pain.  But his struggle was getting worse and it was very important to us to catch it before struggle turned into suffer, if that makes sense.

We called our vet and our appointment was at noon.  I suggested we take him out to the blueberry bushes and let him eat the berries off the grass, which was one of his favorite things to do.  He wouldn’t eat his breakfast, we thought maybe he’d be interested in some berries.  He wasn’t.  But we followed him as he moseyed in the yard and sniffed the grass—which was another one of his favorite things to do.  He loves to follow a scent, but at 16 years, 9 months and 2 weeks he wasn’t bounding around trying to take in all the smells anymore.  He moseyed which we used to call full on mosey mode to describe how Nemo was taking his sweet time to come home after being let out. 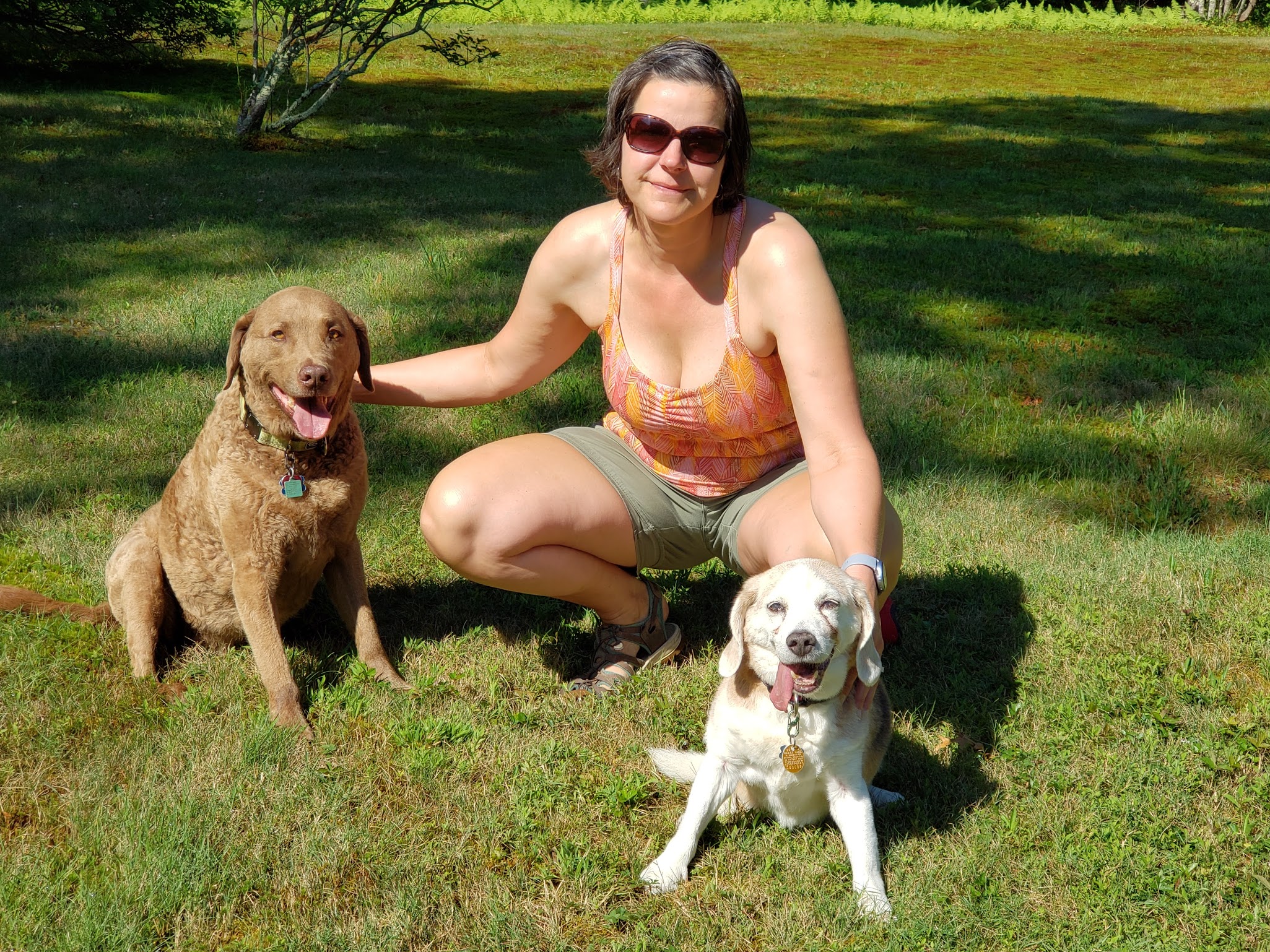 I suggested taking him for an ice cream, which was another one of his absolute favorite things to do.  We went to Skips, they weren’t open for soft serve yet, so we got him a cone with a scoop of vanilla.  He laid in his bed in the back of Todd’s car and ate the whole thing with as much gusto as he could manage. 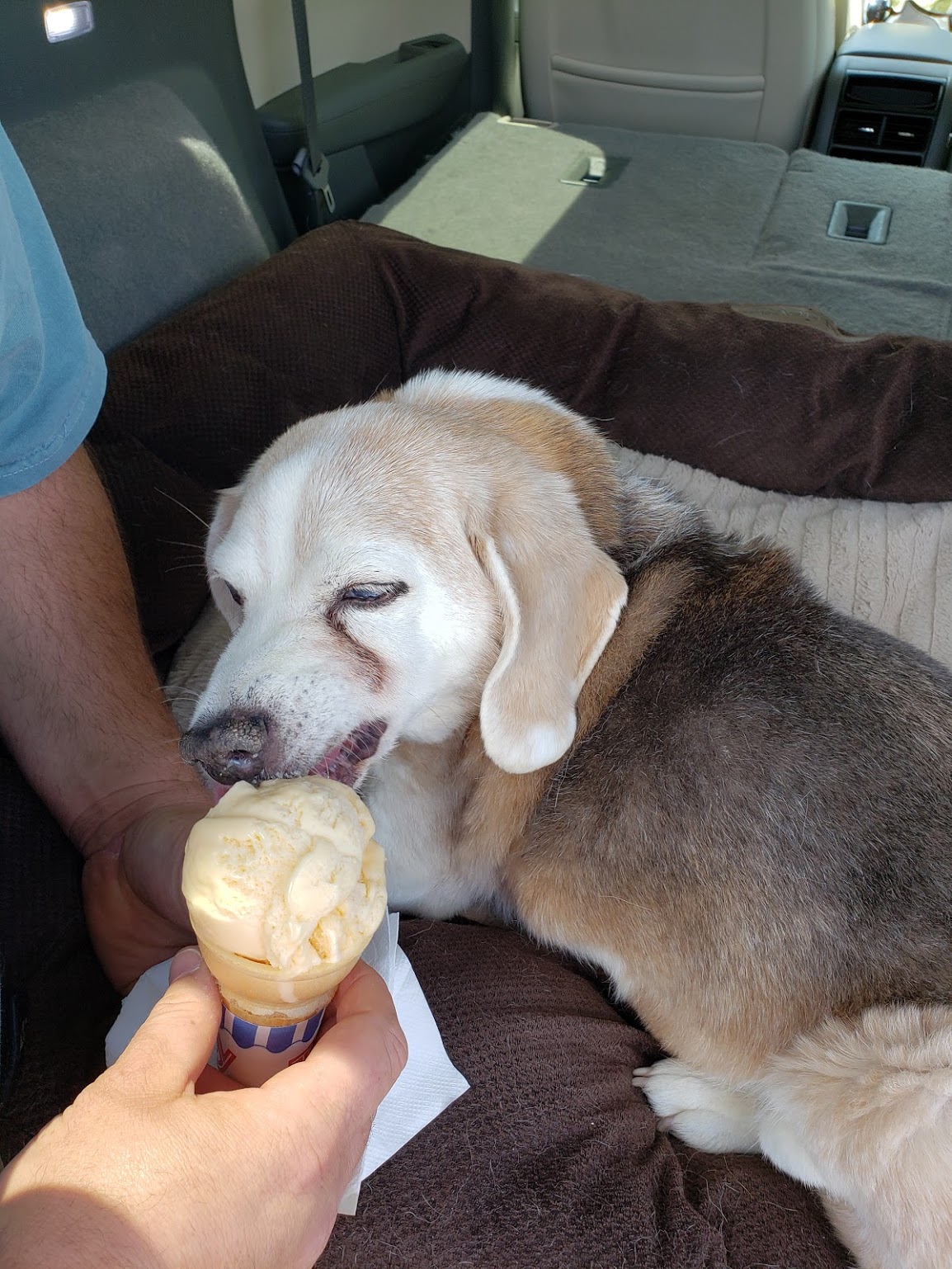 Then we drove to the vet.  We took the long way.  Because of COVID we weren’t allowed inside the vet’s office. So the consultation took place in the parking lot.  Dr. Amy agreed with us, and her eyes got a little misty as we began to cry.  She gave us the choice, she could take him inside to deliver the injection, or she could bring the syringes outside to the car and she’d do it there.  We opted for her to come outside, so we could be with him and so he could lay on his bed rather than the cold stainless steel table.

One minute he was still breathing and the next he wasn’t.  One minute his heart still beat faintly, and the next it didn’t anymore.  We told him he was a good boy, that he was the best boy, as the drugs took effect.  I stroked his velvety ears, I kissed him between the eyes.  “You’re the best boy, Nemo,” I said over and over. I wanted to be sure he knew.

I am sad.  I will always be sad.  I will always miss how he’d cuddle behind my knees as I would lie on my side on the couch which I watched TV.  I will miss how he used to jump up on our bed in the middle of the night and claw at the blankets until one of us would raise it up just high enough for him to commando crawl in and doze off with his business end sticking out.  But while I am sad, I am also thankful to my little Nemo.  He gave us almost 17 years of his life, and he did it unselfishly.  Every day he’d wag his tail when we’d come home, or even when we’d just say his name.  He made me laugh every single day that he was alive.

But more than that Nemo taught me a lot about life.  I’d like to share with you what I learned from him over the years.

1. Make a friend where ever you go. No need to sniff a butt, just smile and say hello.  This is from when Potter was still a puppy and Nemo used him for body heat. 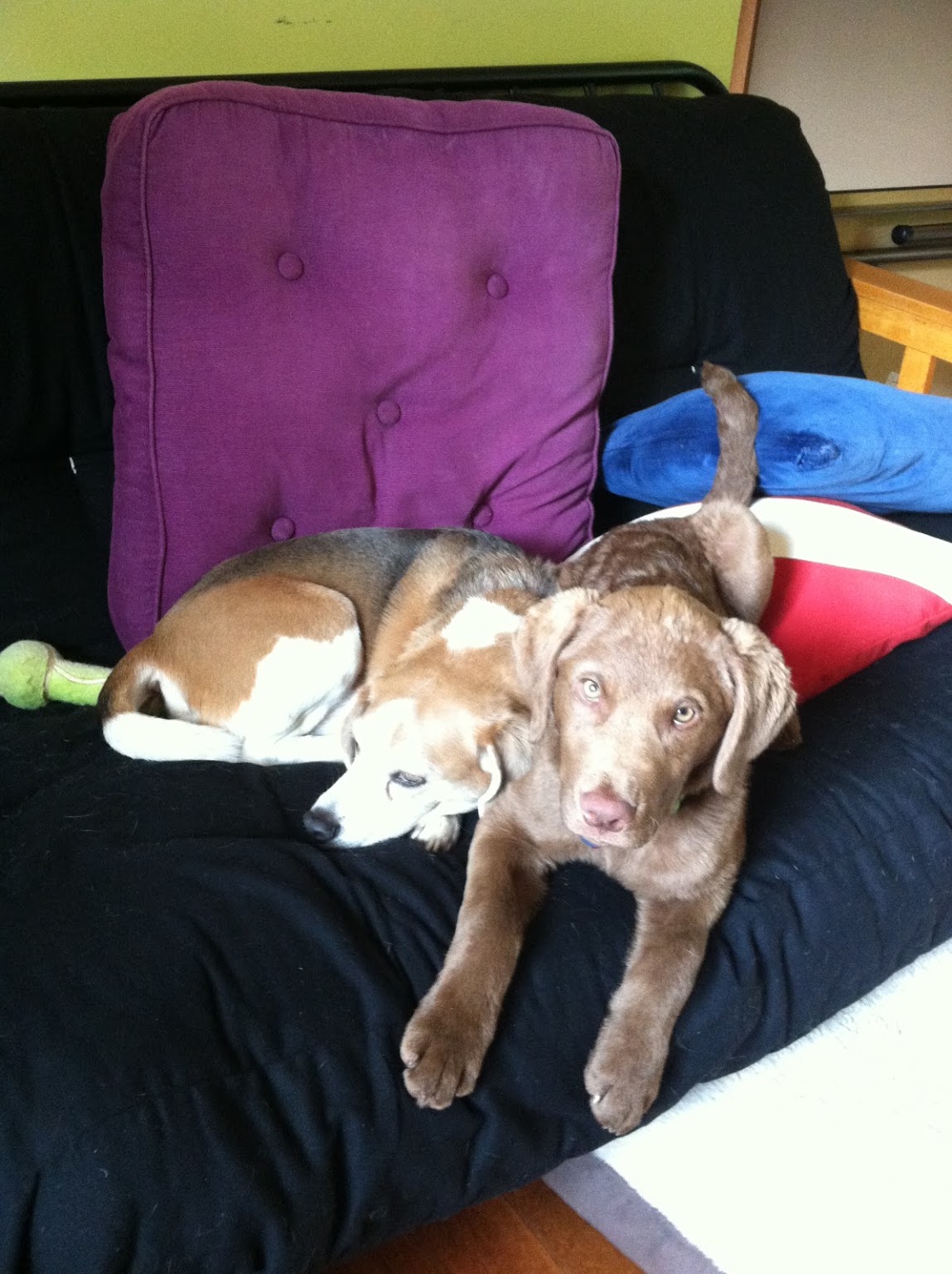 2. Share your snacks. I was the one usually doing the sharing, but that's ok. 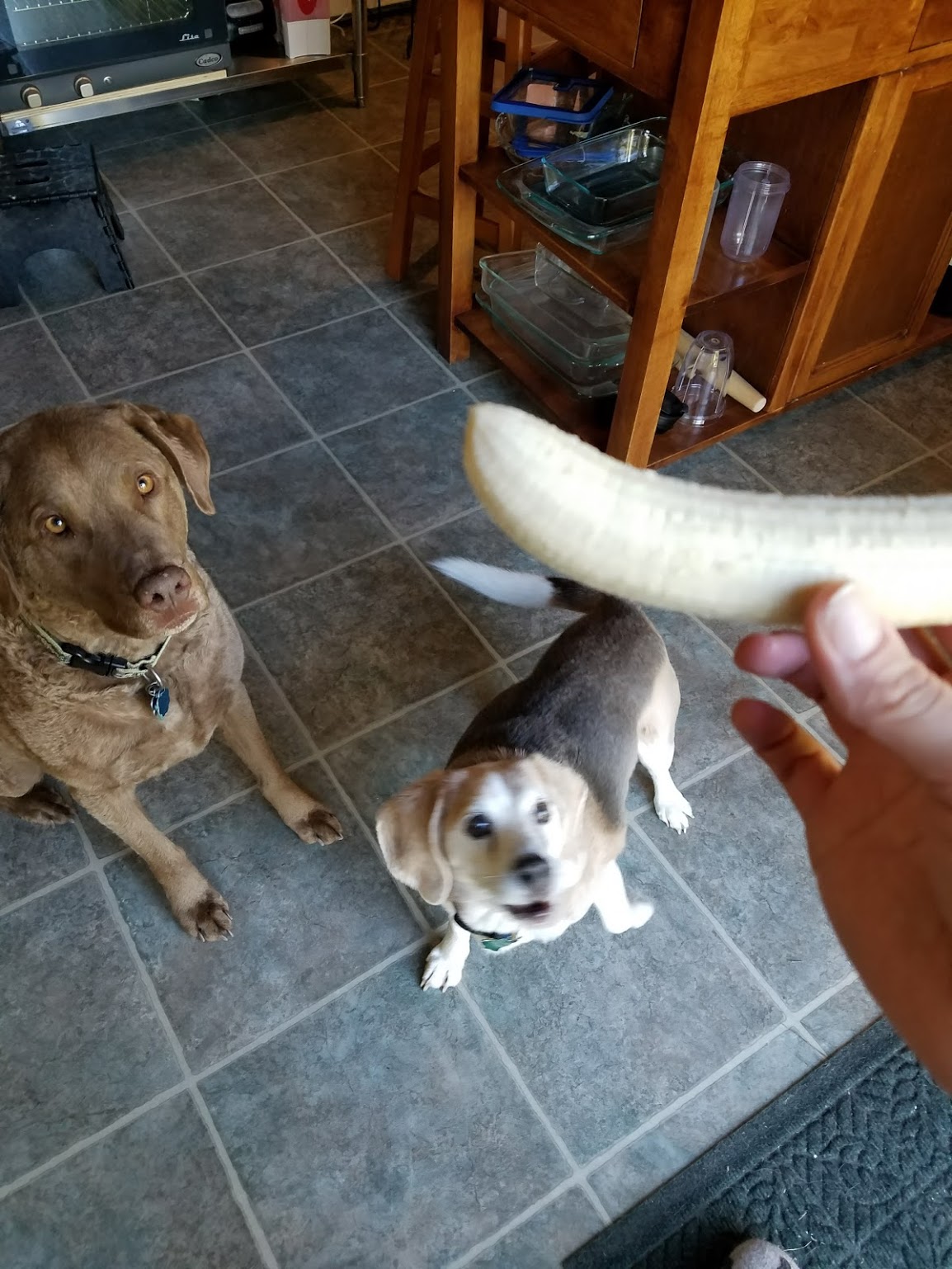 3. Cuddle your people and kiss them. 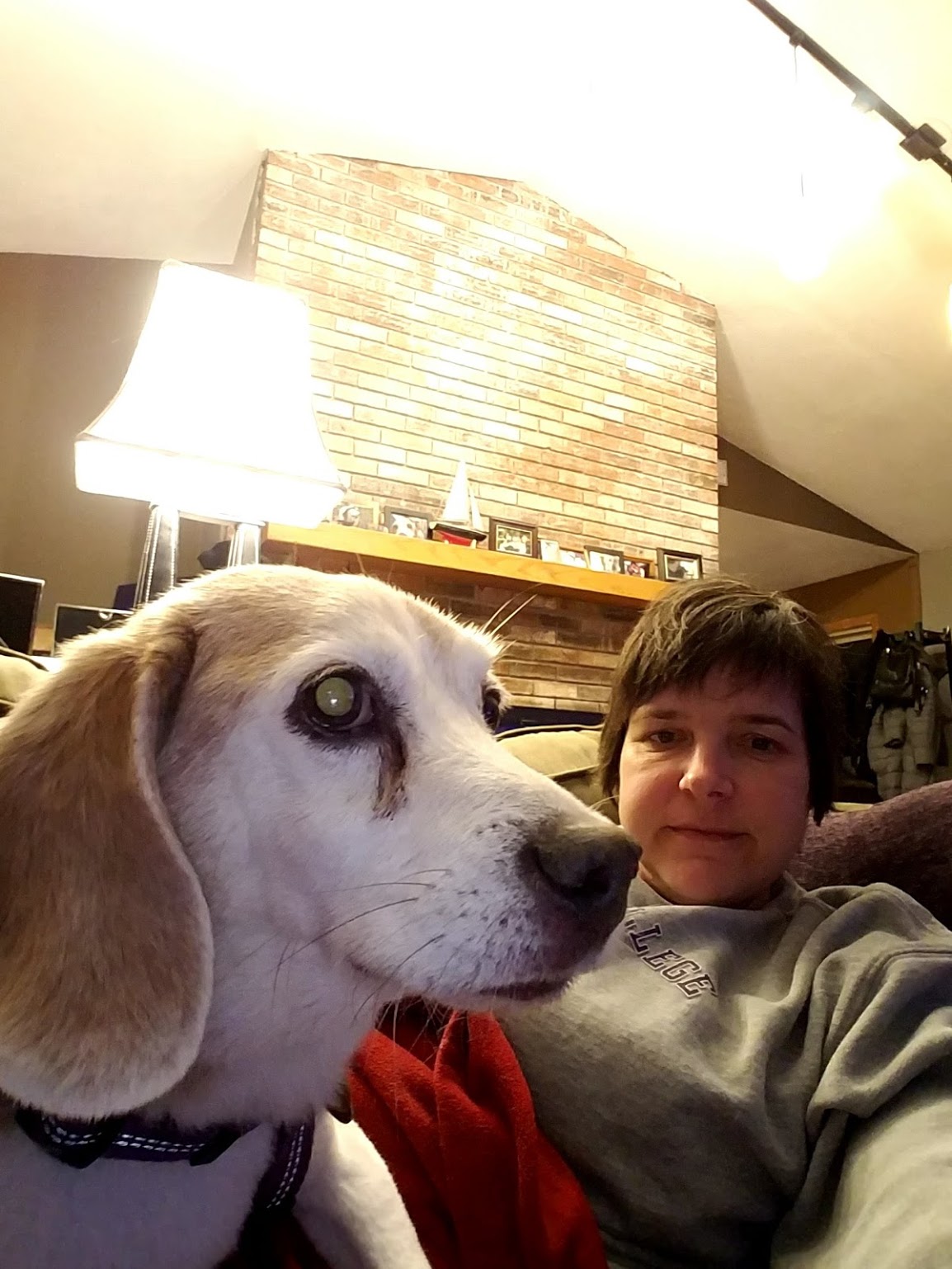 4, Live in the moment. Nemo loved to beach comb and he took his time doing it.  You don't have to roll on dead fish like he did, though. Just take the time to sniff the breeze. 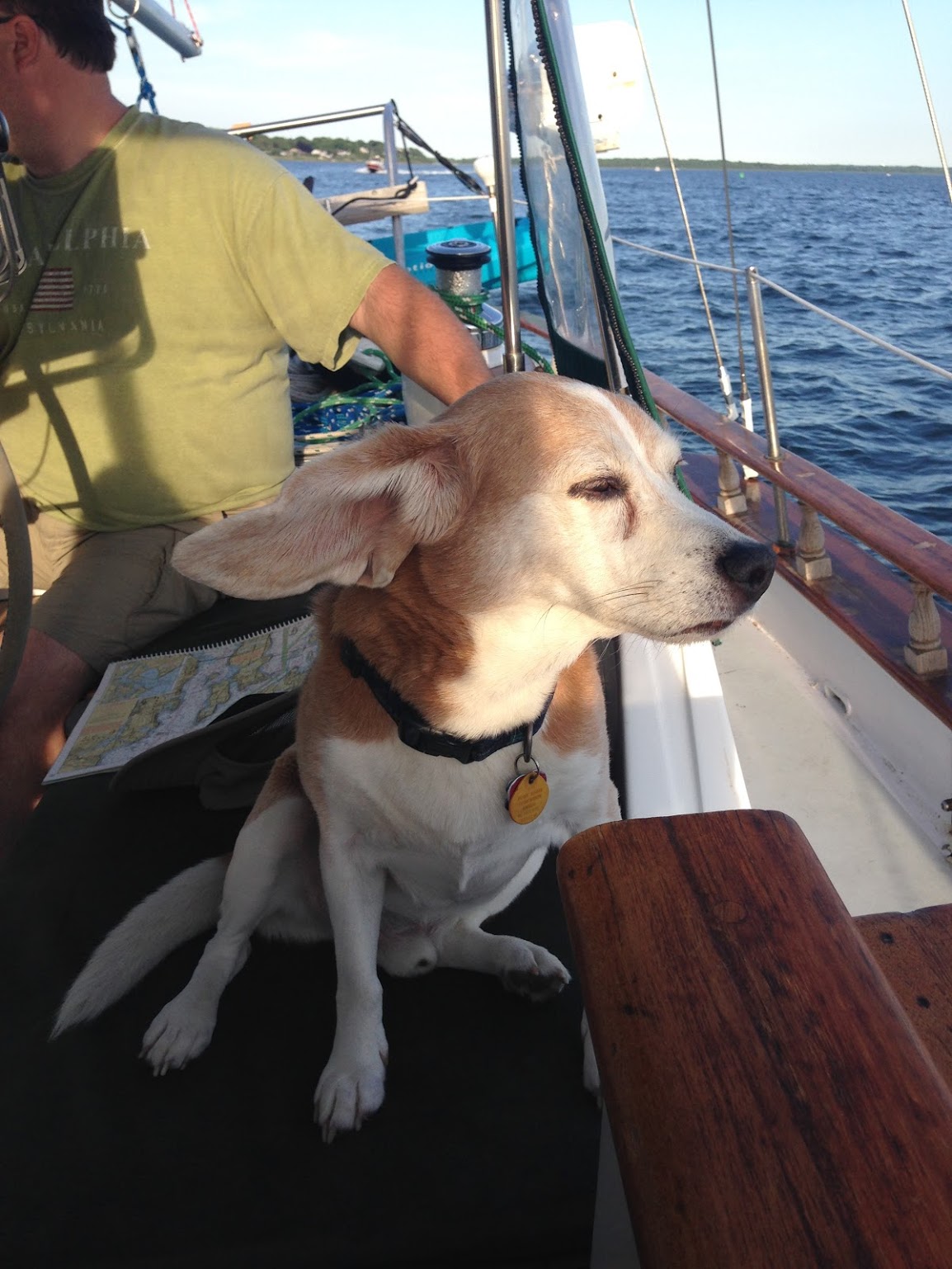 5. Wake up every morning excited about the day and the people you are spending it with.

6. Ride in the front, watch where you're going, cheer loudly when you're almost there.  We used to joke that we had BPS in the car, or beagle positioning system.  He always watched where we were going, and he would bark and wag when he'd recognize a Nemo approved destination. 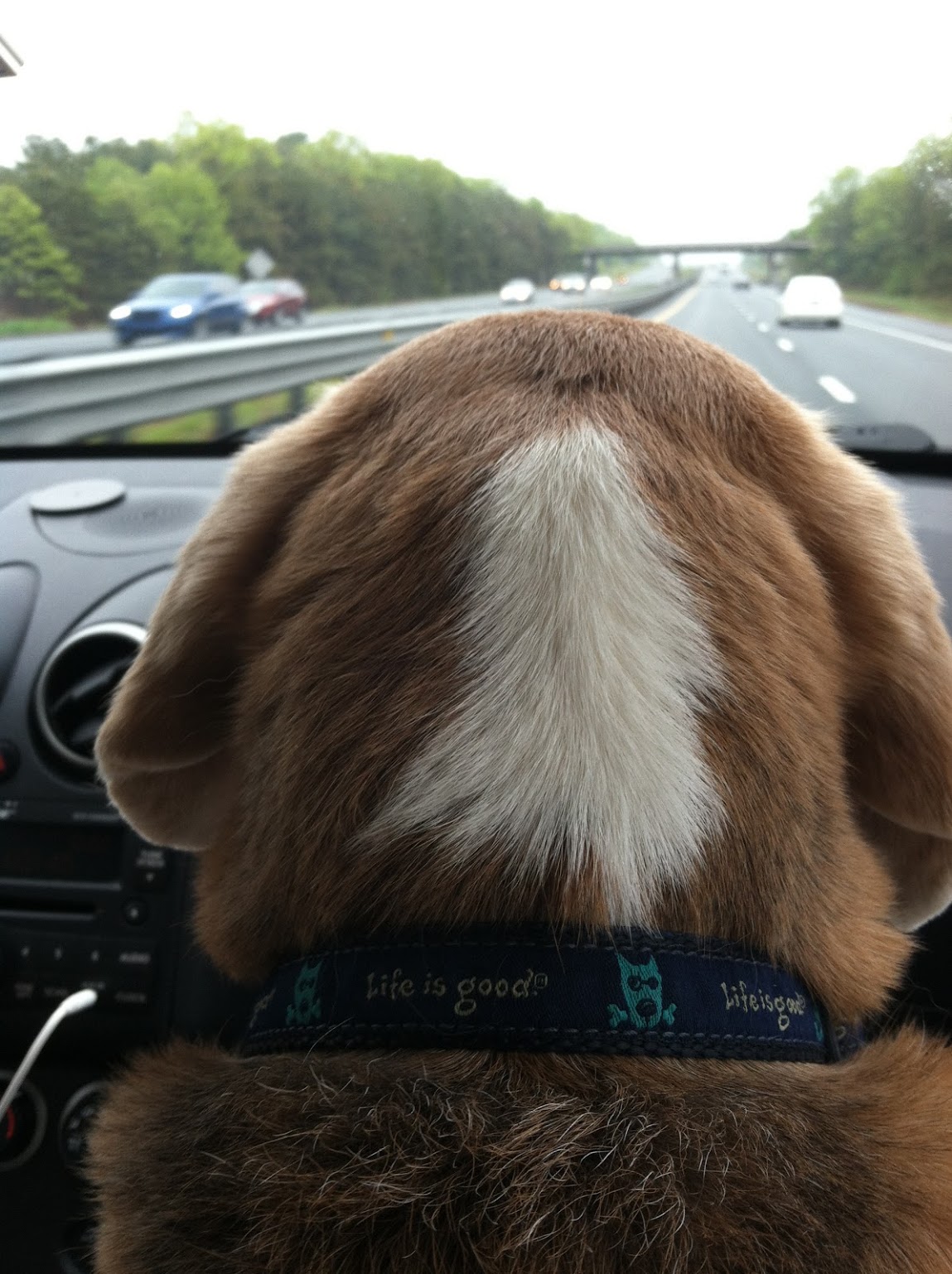 7. Ask for what you want. Nemo always made sure we knew when he wanted to come back inside or if he had an extra interest in a pizza crust.  In this case my birthday cake. 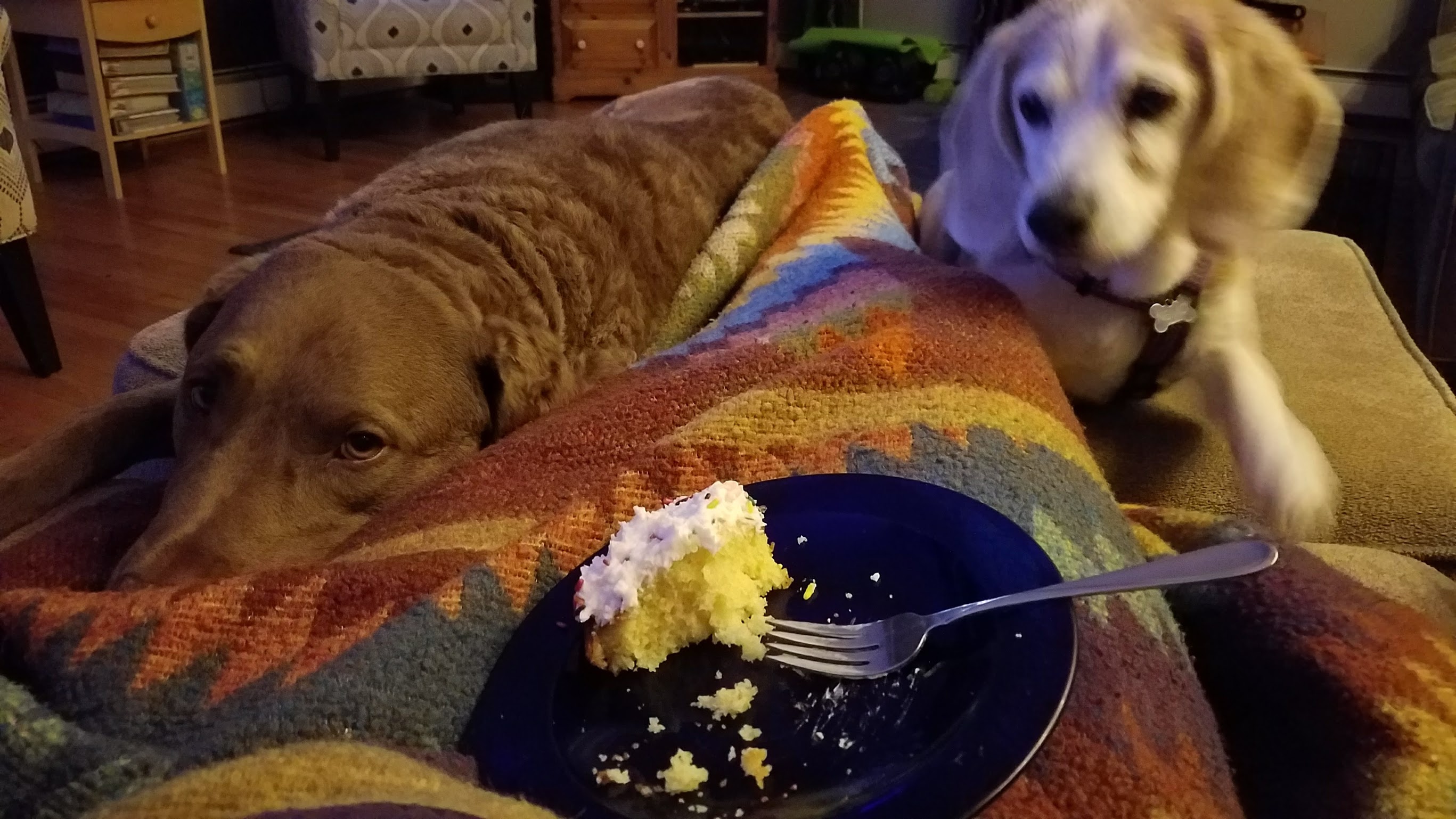 8. Nap. And when you do make sure your napping spot is perfectly comfortable. Fluff up those blankets and get them just right. He used to fluff up his nest so intently Todd would joke about Nemo having to go to City Hall to pull a permit for the construction project.  The result often looked something like this. 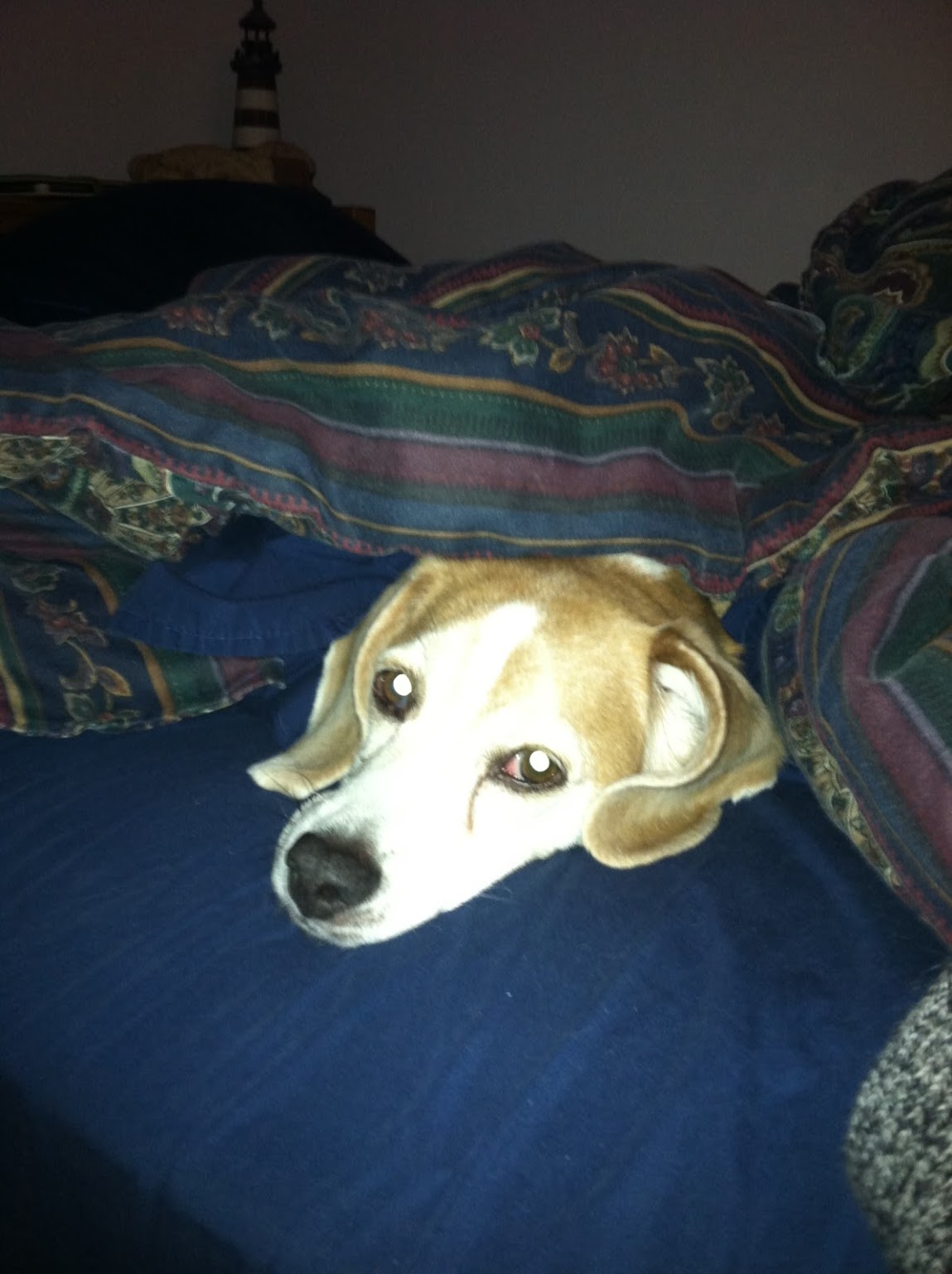 9. When at a party go for the smoked gouda. Go for the salsa. Be a pirate and go for the kamikazees or rum punch. Stand up on a table.  He once got onto a coffee table and inserted his entire snout into a bowl of salsa.

10. Eat your broccoli with gusto. 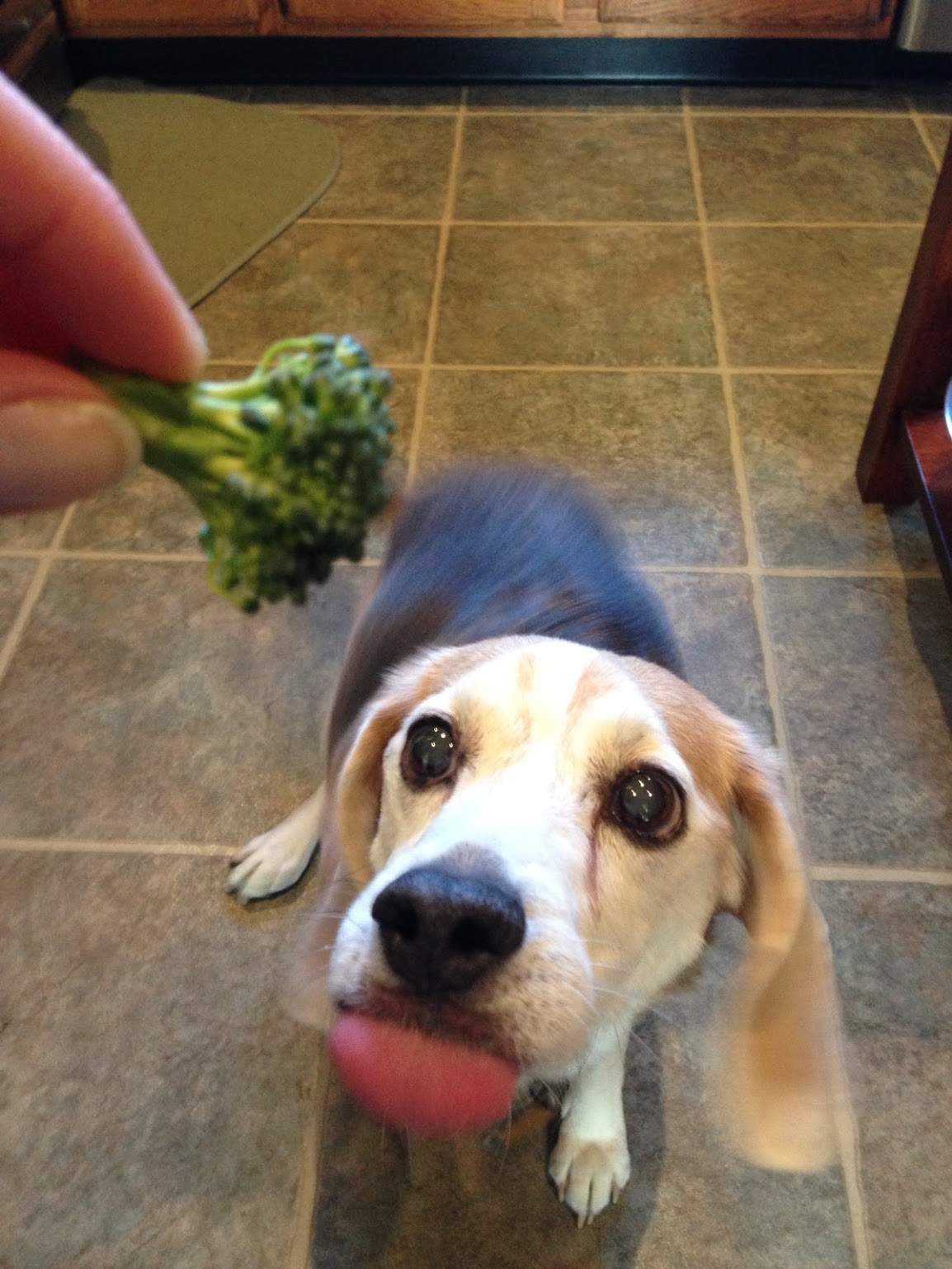