It All Happened on North River Street

My parents are the classic immigrant success story.  They came to America with nothing, busted their butts, saved, raised 5 children and put them through college.  My dad is a brilliant machinist and basically an engineer without the fancy degree who can build literally anything out of a block of metal.  He started out in Poland working at an airplane factory that manufactured Soviet MIG aircraft.  Then he came to the US and worked in several shops until he started his own company with two of my uncles.

So much of my early childhood was spent in that building, until 1980 when my dad merged his company with another one just a few miles down the road—I was 6 then.  Just about every night my mom would feed the 5 of us dinner, then she’d fix a plate for Dad.  He always worked long hours, he came home late and left early in the morning.  I remember hearing his blue pickup truck start in the mornings as I was just starting to wake up.  Mom would put the food in a sauce pan, put the lid on it, then put it into a paper grocery bag and roll the top of it down.  Then she’d pile all of us into the baby blue Chevy Impala station wagon and deliver dinner to dad at the shop.

He’d work and eat, they’d catch up.  Me and my brothers and sister would explore the ruins of the old Bigelow Carpet mill that were nearby.  There were piles of old bricks, ghosts of building foundations, and seemingly miles of broken windows on the walls that remained.  Sometimes we’d walk to the nearby drug store to get some candy.  This was the late 70s; supervising your kids in piles of rubble was entirely optional.

It was a 4 story building at 33 North River Road across the street from the Connecticut River.  Sometimes we’d walk north all the way to the dead end.  The street had small houses that were likely built when the carpet mill was in operation.  There was a train track that ran parallel to the street which separated us from the mill ruins.  I am sure Mom told one of my older siblings to stay off the tracks and stay away from the river.  I remember it feeling scandalous to step on the tracks, and I don’t remember ever going down to the river.  As the sun was setting across the river the light reflected in whatever remained of the windows in the ruins.  There was a massive smoke stack, made entirely of brick, that we could see from miles away that we called King Kong’s cigarette.  The interior of Dad’s space was very barebones.  The sheetrock walls weren’t painted except for in the office.  The floors were concrete, except for the durable low pile carpet in the office.  In the main part of the shop the walls were brick and painted white that eventually got grungy from housing metalworking machines, and all the windows had arched tops on them, brick all around the windows.  You just don’t see buildings made like this anymore.

Dad’s shop occupied the first floor of the building.  Mom used to park in the little lot just to the south of the building, there was a door that led into the office that we never used.  Dad never used that office.  There were desks in it and a massive wall safe that was taller than toddler me.  We always entered through the west side of the building into kind of like a foyer.  There was a small loading dock there, and when we walked in there were usually boxes and finished things that Mom would deliver to the customers, or they would come and pick up.  To the right there was a small storage room with thin walls and the fluorescent lightbulbs in there always hummed.  There were a zillion little boxes and a work bench in there.

When you walked past the little storage room there was a ramp to the left that led to the office that Dad never used.  We played in here a lot.  When you walked into the room there were two large glass block windows on the left with deep windowsills.  My brother Kaz used to try to jump onto them and sit without having to use his hands to get up there.  It was such an accomplishment to get myself up onto that ledge even with using my hands.  The windows that faced where Mom parked the car were clear and we used to watch the freight trains go by on the track just behind the building.

The second best feature, aside from the massive windowsills, was the safe.  It was black, the door was heavy, and it was never closed.  It had shelves in it, which made it perfect for a multi-story Barbie dream house.  My sister Chris made furniture out of the Styrofoam filet o fish boxes from McDonalds from the rare occasion when my mom didn’t have time to cook my dad dinner.

Across from the office was another storage room with empty boxes and who knows what.  On the other side of the foyer was the nerve center of CEJ Tool Company, where all the machines were.  There was a massive metal sliding door that I never saw closed.  To the right, once you walked in was the desk, covered in invoices, bills, a black bakelite rotary phone and a pale green typewriter that I used to play with that had both red and black ink ribbons.  Dad kept carbon paper in one of the boxes on the corner of the desk, and that was magical to draw with.

The rest of the shop floor was filled with big machines and the men who operated them.  Most of them had a cloud of bluish cigarette smoke hanging over them.  Some of these guys still work at my family’s shop and are teetering toward retirement.  On the wall past the desk was another workbench with some stools in front of it.  There were drawers of metal stamps with letters on them, the letters were in varying sizes.  Dad used to give me a piece of scrap metal and showed me how to hold the stamp on the metal and hit it with a hammer to get the letter to imprint.  He could make a clear imprint with one hard hit.  I tried with many hits and ended up with single letters kind of mushed together as I tried to imprint my name.  Everything was just a bit grimy from all the machine oil in the air, the metal shavings on the floors that would get swept up by my brothers at the end of the day would embed themselves into the soles of my sneakers.

My mom used to deliver the things my dad made to his customers.  It was a job shop.  Companies would come to him when they needed things made out of metal, he’d make some custom piece, and then put it in the pickup so Mom could deliver it. He did a lot of military subcontracting work, which was pretty lucrative in the 70s and 80s, and this was how he and Mom were able to put 5 kids through college and paid in cash without student loans.  She used to do the truck runs in the morning with me on the passenger seat of the brown Ford pickup.  Then she’d get me home on time to catch the bus for my afternoon kindergarten session and be home to get my siblings off the bus.

And that’s how my early childhood went.  Go to work with Mom in the mornings, go back to work to hang out with Dad in the evenings, roam around rubble, over and over, get a Snickers from Thompsonville Drug sometimes.  Years later, after Mom died, Dad and I were sharing a hotel room in Poland.  We sat up talking and he said “We weren’t the kind of people who said ‘I love you’ a lot.  But we really did.  She never complained and knew that we had things to do so that we could live.”  And that’s what I remember most about my childhood.  Dad worked all the time, 6 days a week.  Mom took care of us and kept life moving forward at home.  She was an inspiration to me as I watch my own husband trying to grow his business and working incredibly hard at it.  Mom taught me how to support Todd without even meaning to teach me that.  I just learned it from watching her bundle up dinner and pile us up into the station wagon every night.

Just this morning my oldest brother Walter posted that the building at 33 North River Street, where I spent so much of my early childhood, burned to the ground.  I watched the videos and felt a little choked up.  I would have loved to go into that space just one more time to see how high those window sills in the office really were.

This is what it looked like, the window that is cased in white was where the office was where I used to play. 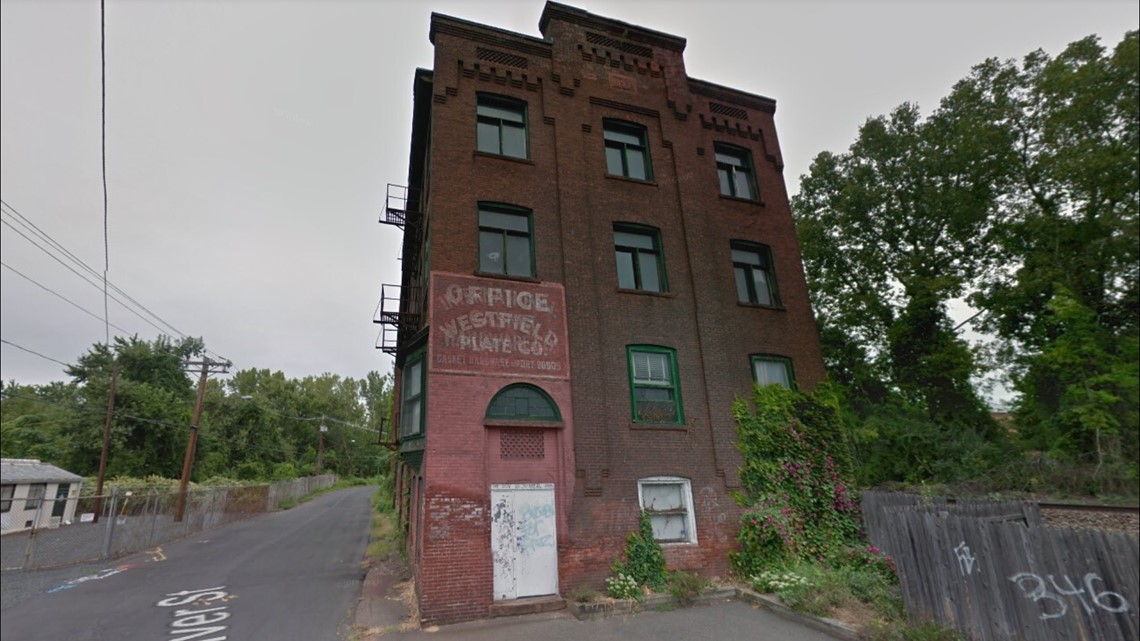 And this is after they managed to put out the fire. 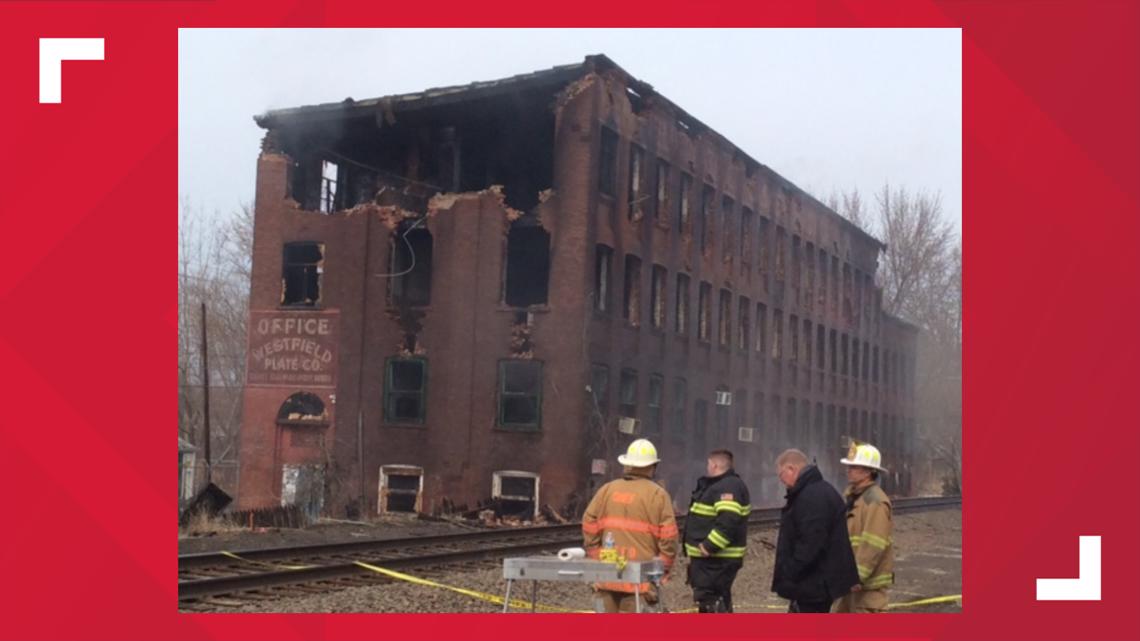 My dad is the man on the right.  I am not sure who the man on the left is.  He looks familiar, he definitely worked there when I was a little kid.  The machine in the picture is shiny and new.  It's a grinder, I remember that it moved side to side to smooth the surface of the metal. 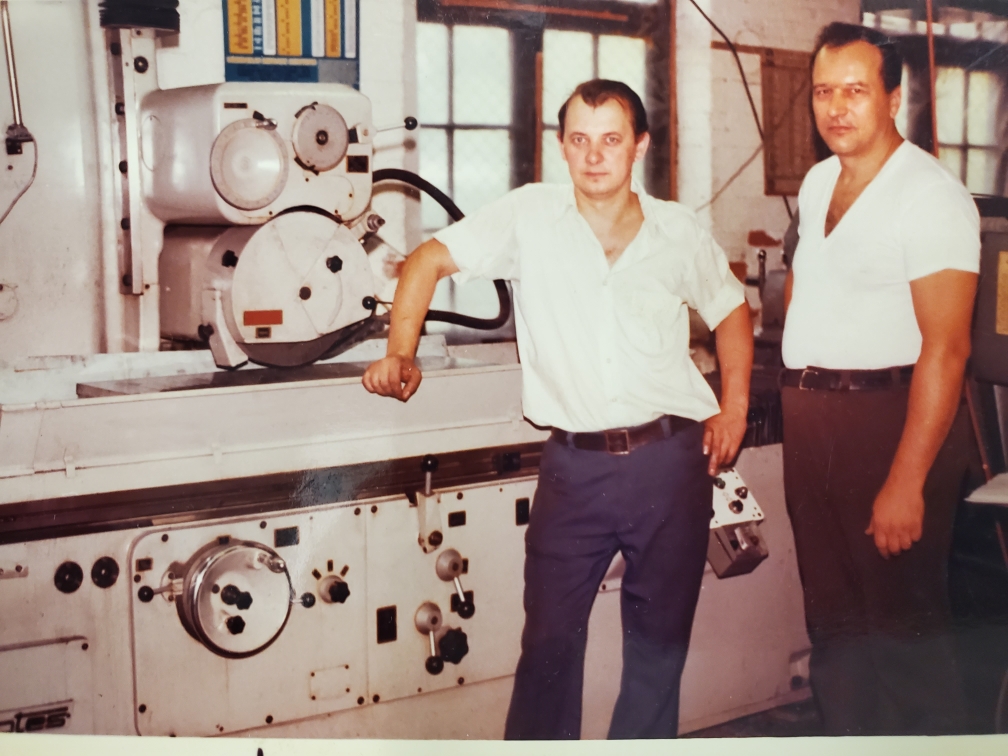 My brother Walter is on the left, my sister Christine on the right.  They're standing behind something my dad made. It cracks me up how serious they are, kind of like that American Gothic painting. 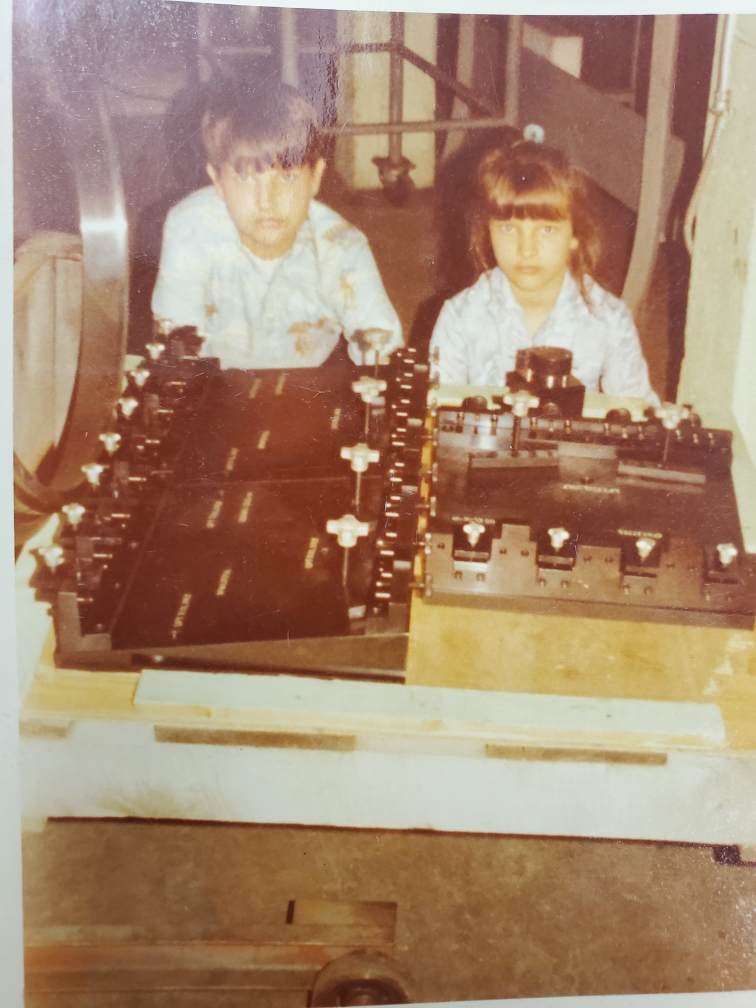